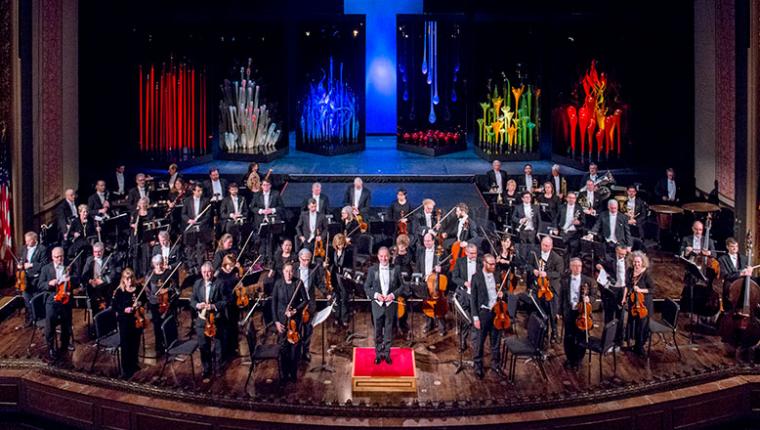 The University of Dubuque presents the Columbus Symphony Orchestra w/ Alan Morrison -- May 15.

A special virtual event wrapping up the University of Dubuque's “Live at Heritage Center” programming for the 2020-21 season, the May 15 concert with the esteemed members of the Columbus Symphony Orchestra and world-renowned guest organist Alan Morrison will follow a dedication ceremony for the university's new custom-crafted pipe organ, a glorious instrument with more than 3,000 pipes gifted by John and Alice Butler.

The Columbus Symphony was founded in 1951 as the Columbus Little Symphony, and was first governed and managed by the Women’s Association. From its earliest days, the Columbus Symphony has been committed to education and supporting young musicians, with the Youth Orchestra founded in 1953, and the ensemble achieved major-orchestra status with the League of American Orchestras in 1988, joining the 50th largest orchestras (by budget) in North America. The following year saw the release of the nationally acclaimed recording of Anything But Lonely with Peter Nero, who was then the symphony's Principal Pops Conductor, and in 2001, the Columbus Symphony celebrated its 50th anniversary with a sold-out debut at Carnegie Hall. Conducted by Music Director Rossen Milanov, the repertoire for the musicians' May 15 performance will include compositions from Léon Boëllmann, Edward Elgar, Alexandre Guilmant, Camille Saint-Saëns, and William Grant Still.

A resident of Philadelphia, Alan Morrison earned degrees in both organ and collaborative piano at the Curtis Institute of Music in Philadelphia. His concert career began in earnest after capturing First Prize in two important national organ competitions in 1991 – the Arthur Poister National Organ Playing Competition and the Clarence Mader National Organ Competition – and the Silver Medal at the 1994 Calgary International Organ Festival and Competition. While pursuing post-graduate study at the Juilliard School, he was invited to join the prestigious concert organist management Karen McFarlane Artists, Inc., and has since performed in the leading organ venues throughout the United States and Canada. He has also performed in Russia, Europe, and South America, with his engagements including numerous dedicatory recitals and performances as orchestral soloist and collaborative musician. Morrison is additionally noted for his teaching career, having taught, since 2002, at the world-renowned Curtis Institute of Music, where he holds the Haas Charitable Trust Chair in Organ Studies.

A dedication ceremony for the University of Dubuque's new pipe organ will be held at 6:30 p.m. before the Columbus Symphony Orchestra's May 15 performance at 7:30 p.m., and the free livestream events are viewable by visiting Dbq.edu/heritagecenter.