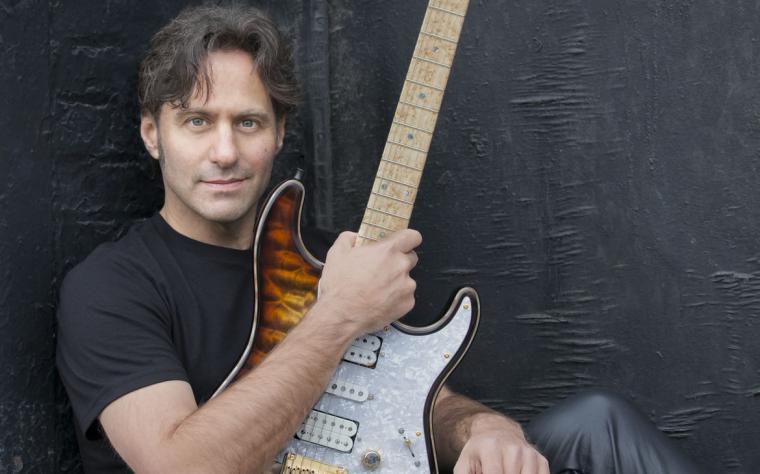 Dave Fields at the Moline Viking Club -- May 6.

Writing in Guitar Player Magazine, reviewer Michael Molenda stated that blues artist Dave Fields delivers “an exhilarating concert experience if you ever get a chance to see [him] live.” And on May 6, blues fans and Moline Viking Club patrons will get that chance in a special event presented by the Mississippi Valley Blues Society (MVBS), one that will show why Fields was praised by Elmore magazine as “a superb guitarist with an over-the-top, inecndiary style.”

Fields grew up in New York City the son of noted composer/arranger/producer Sammy “Forever” Fields, who, through his recording studio, first introduced Dave to such talents as Sammy Kahn, Rupert Holmes, and Stevie Wonder. After attending Berklee College of Music, Dave immersed himself in the Manhattan music scene as a composer, arranger, and producer like his father, but also as a multi-instrumentalist, with the list of instruments Fields plays including guitar, bass, upright bass, mandolin, banjo, pedal steel, ukulele, and drums. He spent years recording with the likes of Aretha Franklin, The Drifters, Lenny Kravitz, and Blues Traveler, and in 2008, Fields released his first solo effort with All Wound Up, an album that AcousticMusic.com called “a swinging fusion of rock, blues, folk, rave-up, and just plain high-spiritedness.”

Presently touring in support of his 2017 CD Unleashed and last month's EP release Rearview, Fields' professional accolades have included the 2006 award for “Best Self-Produced CD” Back in Bluesville at the International Blues Challenge, and his 2012 induction into the NY Blues Hall Of Fame alongside John Hammond and Gary U.S. Bonds. Meanwhile, his rave reviews have continued to amass with releases such as 2012's Detonation, 2014's All In, and 2016's Neck Deep. Big City Rhythm & Blues magazine has praised Fields' “pleasing vocals, heartfelt lyrics, and strong guitar and keyboard work,” while the San Diego Blues Society's Michael Kinsman enthused, “If it's possible to have too much musical talent, Dave Fields is living proof.”

Admission to Dave Fields' 5 p.m. concert on May 6 is $8 for MVBS members and $10 for non-members (with applications available at the Moline Viking Club door), and more information on the evening is available by calling (563)322-5837 or visiting MVBS.org.