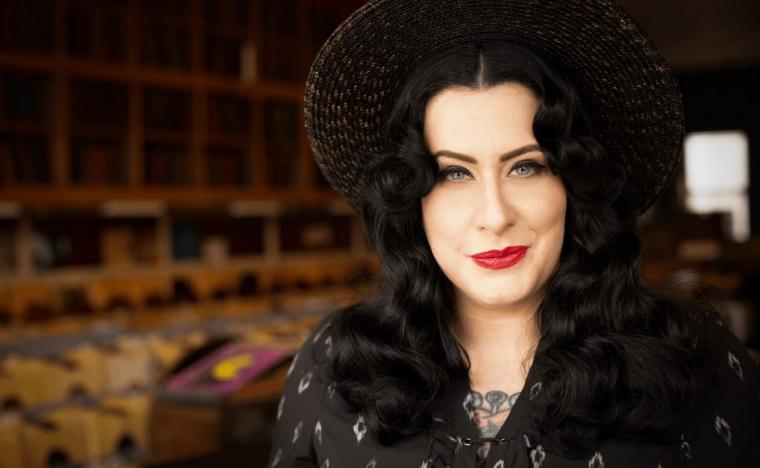 Davina & the Vagabonds at the Redstone Room -- November 30.

Performing in support of their studio-album debut, and treating music lovers to what Glide magazine called their “inexplicable way of giving old-time blues and jazz a fresh, contemporary feel,” the touring musicians of Davina & the Vagabonds return to Davenport's Redstone Room for a free concert in the venue's “Guest List Series,” their November 30 set featuring genre favorites plus new songs from the group's summertime release Sugar Drops.

With its influences ranging from Fats Domino & the Preservation Hall Jazz Band to Aretha Franklin to Tom Waits, the Minneapolis-based Davina & the Vagabonds – led by vocalist Davina Lozier – originated in 2005 and released its first full-length, all-original album Black Cloud in 2011, a debut that was awarded four-and-a-half stars from Downbeat magazine and eventually named one of the 10-best releases of the year by the Star-Tribune. The group's next album, 2014's Sunshine, hit number 13 on the Billboard Blues Chart and led to the band's appearance on the hit BBC show Later with Jools Holland. And with the release of Davina & the Vagabonds' third full-length recording, 2016's Nicollet & Tenth, the ensemble moved to the forefront of modern-blues musicians, with American Blues Scene magazine raving, “Their shows are filled with New Orleans charm, Memphis soul swagger, dark theatrical moments that evoke Kurt Weill, and tender gospel passages.”

Over the past decade, the group has traveled internationally to countries including Switzerland, Romania, and Finland, and has continued to amass widespread critical acclaim, with NPR lauding Davina's “sassy, salty, sweet voice that’s childlike at the top, husky at the bottom,” and Downbeat saying, “Davina zips to near-impossible heights in a divine declaration of romance.” Currently touring in support of this year's Sugar Drops, Davina & the Vagabonds' musicians are enjoying some of the strongest notices of their careers for their studio-album debut, with NoDepression.com raving that the group “cunningly matches music with lyrics so that lighter lyrics float along joyous strains of jazz while darker lyrics weave their ways through moody blues tunes.”

Davina & the Vagabonds play their concert in the Redstone Room's “Guest List Series” with an opening set by Mo Carter & Co., admission is free, and more information is available by calling (563)326-1333 or visiting RiverMusicExperience.org.