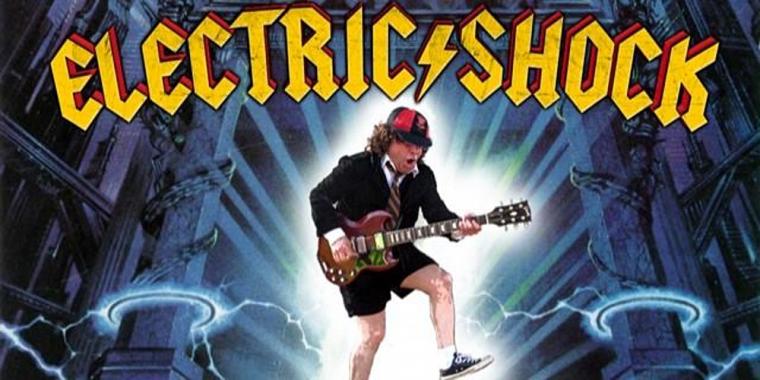 Electric Shock: The AC/DC Show at the Redstone Room -- November 26.

Winners of the Quad-City Times' 2017 Reader's Choice Award for “Best Local Band” and one of the most successful music acts to emerge from the area in recent years, the AC/DC tribute artists of Electric Shock headline a special post-Thanksgiving concert at Davenport's Redstone, their “Back in Black Friday” event on November 26 boasting hits from a classic rock repertoire that includes Billboard chart-toppers Black Ice, Power Up, Ballbreaker, and, of course, 1980's Back in Black.

Since 2014, the local talents of Electric Shock been perfecting the AC/DC show with a high-energy performance, faithfully replicating the band  both musically and visually, and playing all the classic hits and deeper cuts from both Bon Scott and Brian Johnson eras. The band's Johnny Degiorgio, who is also originally from Australia, been playing the role of Angus Young since the early 90’s in his native country with the band Dirty Deeds, and his counterpart Eric Richeal pays homage to Malcolm Young’s looks and authentic tone, playing on identical Gretsch guitars strung up with the same thick string gauges that Young uses. On vocals, John Kiss has been described as “A young Brian Johnson that can still hit the high notes," and the band's backbone is provided by bassist Darren Followwill, who thumps steadily throughout the night with the roar of the Ampeg refrigerator cabinet. Meanwhile, Tom Ramirez, playing true to Phil Rudd, hammers away on the Phil Rudd signature series Sonor drum kit with an impressive spread of Paiste 2002 cymbals just like Rudd himself. Over the years, Electric Shock has played various festivals, music venues, casinos, and special events across Nebraska, Iowa, Illinois, and Wisconsin, and has performed as the opening act for Heart, Blue Oyster Cult, Firehouse, Head East, Drowning Pool, Lynch Mob, and Hairball.

Between 1975 and 2020, AC/DC itself has released 17 studio albums (15 available worldwide and two released only in Australia), two soundtrack albums, three live albums, 11 video albums, and two box-set albums. Brothers Angus and Malcolm Young formed the band in 1973, and debuted two albums in Australia before releasing their first international effort High Voltage with vocalist Bon Scott, bassist Mark Evans, and drummer Phil Rudd. In 1980, less than a year after the release of the successful Highway to Hell, Scott passed away and was replaced by British singer Brian Johnson, with whom AC/DC released their best-selling album Back in Black, which sold 25 million copies domestically, 50 million worldwide, and went on to become the second highest-selling album in history. Their 2008 album Black Ice, meanwhile, reached number one in 29 countries, and over the 47 years of their career, AC/DC has sold more than 200 million albums worldwide, roughly 75 million of them in the United States.

Electric Shock plays the Redstone Room's “Back in Black Friday” event on November 26 with an opening set by musicians from the QC Rock Academy, admission to the 8 p.m. concert is $10 for general admission and $50 (plus admission) for a reserved table, and more information and tickets are available by calling (563)326-1333 and visiting RiverMusicExperience.org.