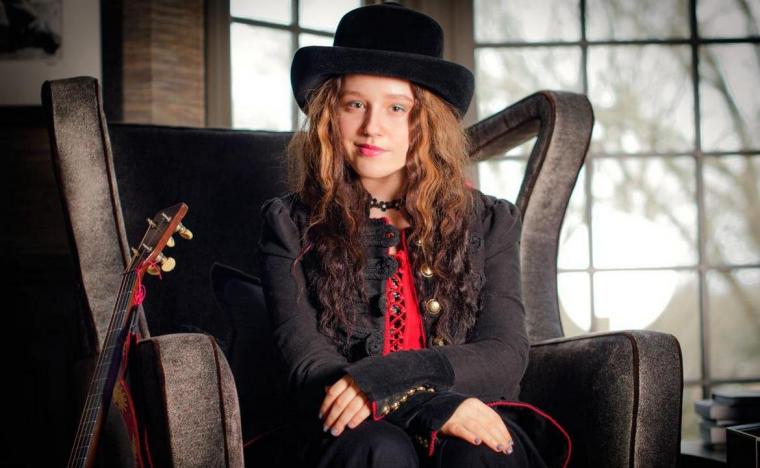 EmiSunshine at the Circa '21 Speakeasy -- September 6.

A legitimate musical prodigy who released two albums before becoming a teenager, the 14-year-old YouTube and concert sensation EmiSunshine makes her debut appearance at Rock Island's Circa '21 Speakeasy on September 6, the young artist cited by Rolling Stone as “a mind-bogglingly talented adolescent who writes intense Appalachian folk tunes in the Carter Family tradition and sings them with wisdom and ferocity.”

Born Emilie Sunshine Hamilton, the singer/songwriter, guitarist, and mandolin player has spent her young life surrounded by family members who possess a genuine love for “salt-of-the-earth” mountain melodies and lyrics. EmiSunshine herself embraced the classic country, blues, and folk music that echoed throughout her home in Madisonville, Tennessee, and influenced by music legends including Loretta Lynn, Tanya Tucker, and the Louvin Brothers, she is a throwback to earlier eras of country music and trendsetters such as Bessie Smith, June Carter, Loretta Lynn and Hank Williams. She launched her professional career performing at churches, community outings, and local festivals, but it was EmiSunshine's 2014 performance at a Tennessee flea market that skyrocketed her career, as the performer quickly became a worldwide phenomenon after a video of her stage show went viral on YouTube. Since that breakout at age nine, EmiSunshine has garnered more than 14 million YouTube views and a half-million Facebook followers.

EmiSunshine released her first single "Oh Mary, Where Is Your Baby?" in 2014 and a year later released “I Am Able," with her first full-length CD Black Sunday '35 recorded when she was only nine years old. Meanwhile, her follow-up album, 2017's Ragged Dreams, made the gifted youth from Tennessee a critic's darling. NoDepression.com wrote, “This 13-year-old prodigy proves she's preternaturally talented, with the instincts, confidence, and savvy to suggest she's a major star on the rise,” while Rolling Stone called Ragged Dreams “a stunning album that's driven by acoustic instrumentation and EmiSunshine's plaintive, powerful vocals.” The artist currently performs about 150 nationwide shows per year, has performed twice on Marty Stuart's Late Night Jam during the CMA Music Fest, and has enjoyed 16 appearances with the Grand Ole Opry.