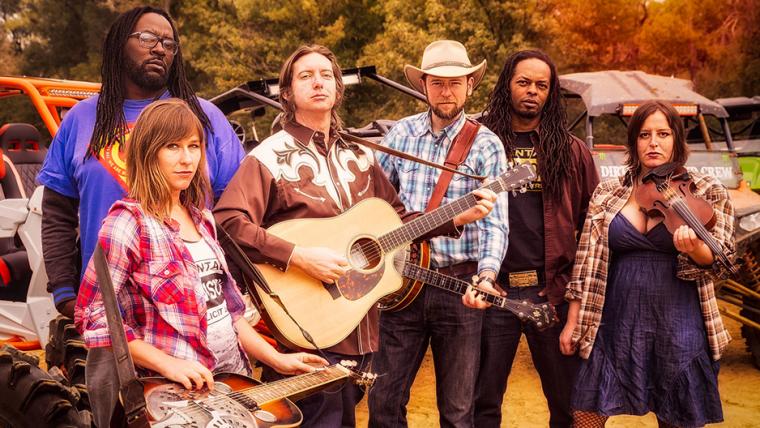 Gangstagrass at the Redstone Room -- May 10.

Delivering what NoDepression.com calls “a daring blend of innovative modern swagger and classic Americana cool which dares listeners not to come along for the ride,” the bluegrass, hip-hop, and country-rap artists of Gangstagrass play a special free concert at Davenport's Redstone Room on May 10, producing a singular sound that, according to Essentially Pop, “smashes every borderline, every genre, every preconceived idea of what a bluegrass hip-hop fusion might sound like.”

Originating in New York City in the middle of the last decade, Gangstagrass is founded and led by the Brooklyn-based (and single-named) producer Rench, who spent the early 2000s making beats for local rappers and hosting country-music nights in popular NYC venues. In 2007, as he has explained, Rench was listening to the 1970s recordings of Ralph Stanley and the Clinch Mountain Boys, and couldn't help imagining what classic bluegrass would sound like with rap vocals and beats. The result was the genre-demolishing Ranch Presents: Gangstagrass that he put up for free download, eventually creating intense underground buzz.

Gangstagrass started to see its music reaching a wide audience when the band's song “Long Hard Times to Come,” largely inspired by Lynyrd Skynyrd's “Things Goin' On,” was selected to be the opening theme song of the acclaimed FX drama Justified in early 2010. That July, Gangstagrass producer Rench and rapper T.O.N.E.Z were nominated for an Emmy Award in the category of Outstanding Original Main Title Theme Music, and author Elmore Leonard, whose writings were the basis for the show, stated, “Rench and his friends have done nothing short of creating a new form of music. Gangstagrass takes two types of music that are opposites and mixes them together brilliantly in a way that is natural and enjoyable.” Since then, Gangstagrass has released a quartet of additional albums in 2010's Lightning on the Strings, Thunder on the Mic, 2012's Rappalachia, 2014's Broken Hearts & Stolen Money, and 2015's American Music. The group is currently touring in support of its February album Pocket Full of Fire: Gangstagrass Live, which inspired Americana Highways magazine to rave, “Bluegrass and hip-hop are an unlikely combination, but this album is the perfect blend of those two great styles of music.”

Gangstagrass performs its May 10 Redstone Room concert with additional sets by Super Happy Funthyme Trouble and Jenny Lynn Stacy & the Dirty Roosters, admission to the 8 p.m. show is free, and more information is available by calling (563)326-1333 or visiting RiverMusicExperience.org.