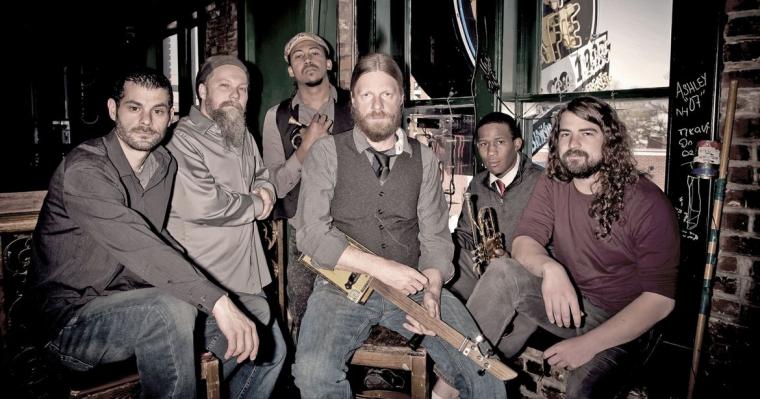 Lauded by Living Blues magazine as “21st Century blues at its best,” the Memphis-based artists of the Ghost Town Blues Band perform a March 24 concert at the Moline Viking Club presented by the Mississippi Valley Blues Society, treating audiences to the soulful, electrifying effects of, as Living Blues stated, “what can happen when the past is distilled through young sensibilities, voices, and instruments.”

Recently featured at the Montreal Jazz Festival, the Ghost Town Blues Band has spent the decade captivating audiences in the U.S. and Canada with a second-line horn entrance, cigar-box guitars, electric push brooms, Allman Brothers-style jams, and even a hip-hop trombone player. Self-described as “not your grandpa's blues band,” the six-man ensemble delivers harmonies and homegrown instruments combined with an energetic, roots-rich flavor that led to them winning Europe's esteemed Independent Label Music Award and a 2015 Blues Blast Music Award nomination for “Best Band.”

The sextet from Tennessee boasts multi-instrumentalist Matt Isbell on lead vocals, Suavo Jones on trombone, Taylor Orr on lead guitar, Matthew Karner on bass, Cedric Taylor on B3, and Andrew McNeill on drums, and performing as the Ghost Town Blues Band, the artists have made the finals at both the 2013 and 2014 International Blues Challenge. They've also opened for the likes of Neil Young, the Steve Miller Band, Keb' Mo', John Lee Hooker Jr., and Johnny Lang, and have been the beneficiaries of excellent reviews for albums including Hard Road to Hope, Dark Horse, and Dust the Dust.

The band's 2018 live album Backstage Pass, meanwhile, won the Ghost Town Blues Band the 2018 Tennessee Music Award for “Best Blues Band” and a 2019 nomination as B.B. King International Entertainer of the Year at Canada's Maple Blues Awards. NoDepression.com called the release “a blast from first track to last,” while American Blues Scene raved that the album “feels like a great night out, capturing the energy of a great band in a perfectly sized club, willing the crowd into submission through talent and musical fluency.”

The Ghost Town Blues Band's March 24 concert at the Moline Viking Club starts at 6 p.m., and admission is $10 for Mississippi Valley Blues Society members and $12 for non-members, with membership applications available at the event. For more information, call (563)322-5837 or visit MVBS.org.