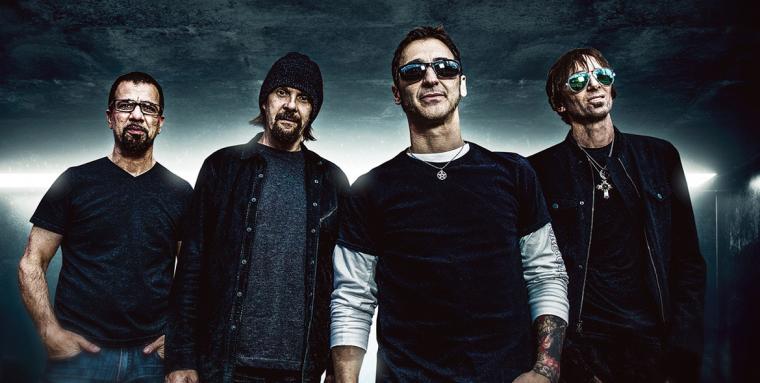 Godsmack at the TaxSlayer Center -- September 22.

One of the millennium's most successful and acclaimed alternative-metal and hard-rock acts, the chart-topping, Grammy-nominated Godsmack lands at Moline's TaxSlayer Center on September 22, the musicians' 2018 album When Legends Rise praised by AllMusic.com as “a highly enjoyable one that stirs the soul in unexpected ways,” with the band itself deemed “reinvigorated, confident, and no less defiant than they were in 1998.”

Founded in 1995 by singer Sully Erna and bassist Robbie Merrill, Godsmack has, to date, released seven studio albums, one EP, two compilations, three video albums, and thirty 30 singles. In 1998, with Tommy Stewart on drums and Tony Rombola on guitar, Godsmack released its self-titled debut album, which was a red version of the musicians' 1996 demo All Wound Up. The album was distributed by Universal/Republic Records and shipped four million copies in the United States, with four of its songs (“Whatever,” “Keep Away,” “Voodoo,” and “Bad Religion”) making the top-10 of Billboard's U.S. Mainstream Rock chart. After contributing the track “Why” to the soundtrack for Oliver Stone's football drama Any Given Sunday, Godsmack released its sophomore album Awake in 2000, a recording that ultimately earned double-platinum sales, scored hit singles with “Bad Religion,” “Greed,” and the chart-topping title track, and a “Best Rock Instrumental Performance” Grammy nomination foir the song “Vampires.”

After Stewart left Godsmack and was replaced by Shannon Larkin, the band released its third album Faceless in 2003, which debuted at number one on the U.S. Billboard 200 and found its chart-topping single “Straight Out of Line” Grammy-nominated for “Best Hard Rock Performance.” A year later, Godsmack released the acoustic-based EP The Other Side, a recording that debuted at number five on the Billboard 200 and was certified gold by the RIAA. Fourth album IV, the band's second release to debut at number one, went on to achieve platunum certification, and after touring in support of the recording for more than a year, Godsmack released the greatets-hits album Good Times, Bad Times … Ten Years of Godsmack that included every Godsmack single (with the exception of “Bad Magick”), a cover of the Led Zeppelin song “Good Times Bad Times,” and a DVD of the band's acoustic performance at Las Vegas' House of Blues. Godsmack's fifth studio release, 2010's The Oracle, was a number-one debut on the Billboard 200 as well, making the band one of very few to have three consecutive chart-topping albums, connecting the musicians to the likes of Van Halen, U2, Metallica. The group's most recent recordings, 2014's 1000hp and last year's When Legends Rise, have also been top-10 Billboard hits, with the latter album's “Bulletproof,” “Under Your Scars,” and title track all number-one hits on Billboard's Mainstream Rock Chart.

Godsmack plays locally on September 22 alongside special guests Halestorm, admission to the 7 p.m. concert is $35-62, and tickets are available by calling (800)745-3000 or visiting TaxSlayerCenter.com.