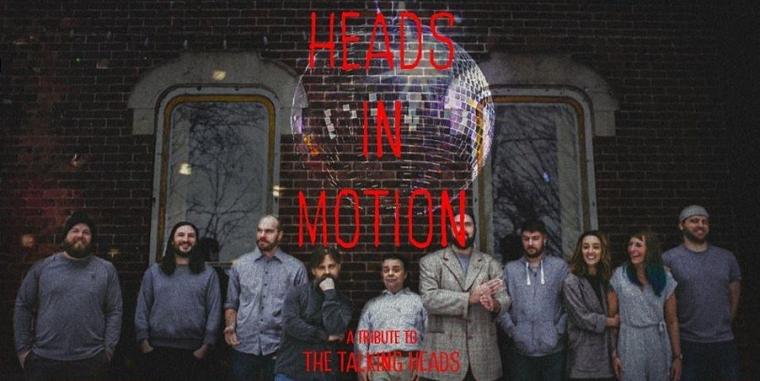 Heads in Motion at the Redstone Room -- October 30.

Following a successful outdoor performance in the River Music Experience Courtyard this past summer, the Quad Cities musicians of Heads in Motion bring their energetic talents inside Davenport's Redstone Room on October 30, with the 10-piece ensemble paying tribute to Oscar, Grammy, and Tony Award winner David Byrne and his iconic rock outfit Talking Heads.

Formed in New York City in 1975 and active until 1991, Talking Heads was composed of Byrne (lead vocals, guitar), Chris Frantz (drums), Tina Weymouth (bass), and Jerry Harrison (keyboards, guitar). Described by AllMusic.com as "one of the most critically acclaimed bands of the '80s," the group helped to pioneer New Wave music by integrating elements of punk, art rock, funk, and world music with avant-garde sensibilities and an anxious yet clean-cut image. As former art-school students who became involved in the 1970s New York punk scene, Talking Heads released their 1977 debut album Talking Heads: 77 to positive reviews. They went on to collaborate with producer Brian Eno on a trio of critically acclaimed releases – 1978's More Songs About Buildings & Food, 1979's Fear of Music, and 1980's Remain in Light – that blended their art-school/punk sensibilities with influence from artists such as Parliament-Funkadelic and Fela Kuti. By the early 1980s, they began to expand their band by including a number of additional musicians in recording sessions and stage shows, notably guitarist Adrian Belew, keyboardist Bernie Worrell, singer Nona Hendryx, and bassist Busta Jones.

After a hiatus, Talking Heads hit their commercial peak in 1983 with the U.S. Billboard top-10 hit "Burning Down the House" from the album Speaking in Tongues, and the following year, the musicians released their critically lauded concert film Stop Making Sense, directed by future Oscar winner Jonathan Demme. Talking Heads released their best-selling album Little Creatures in 1985, produced a soundtrack album for Byrne's directorial debut True Stories in 1986, and released their final album, 1988's world-beat-influenced Naked, before officially disbanding in 1991.

In 2002, Talking Heads were inducted into the Rock and Roll Hall of Fame, four of their albums appear in Rolling Stone's list of the 500 Greatest Albums of All Time, and three of the group's songs – "Psycho Killer," "Life During Wartime," and "Once in a Lifetime" – were included among the Rock and Roll Hall of Fame's 500 Songs That Shaped Rock and Roll. Talking Heads were also number 64 on VH1's list of the "100 Greatest Artists of All Time," and made the roster in the 2011 update of Rolling Stone's "100 Greatest Artists of All Time." Meanwhile, as a solo artist, Byrne won both an Oscar and a Grammy for helping to compose the score for 1987 Best Picture winner The Last Emperor, and last month, he received a special Tony Award for his Broadway smash David Byrne's American Utopia, a stage piece adapted from his 2018 album.

Heads in Motion performs their Talking Heads tribute show on October 30 with an opening set by the Textures, admission to the 9 p.m. concert event is $10-12, and more information and tickets are available by calling (563)326-1333 and visiting RiverMusicExperience.org.