“How Great Thou Art: The Gospel Music of Elvis Presley,” October 14 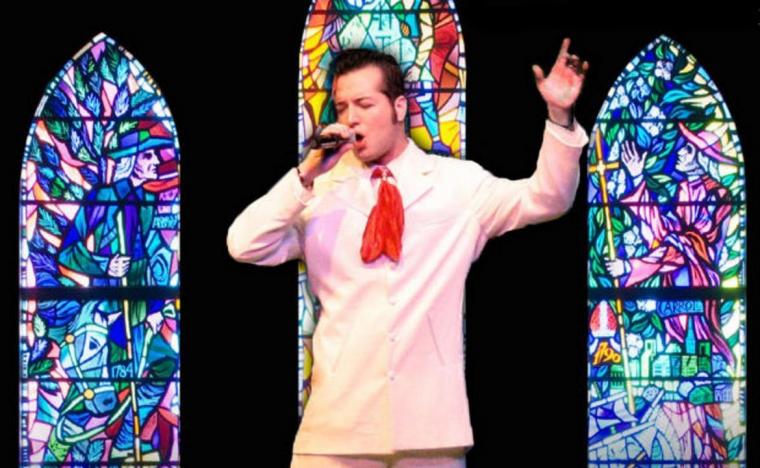 “How Great Thou Art: The Gospel Music of Elvis Presley" at the Circa '21 Dinner Playhouse -- October 14.

In addition to being adored for his rock, pop, blues, and seasonal hits, Elvis Presley was, of course, one of the world's most beloved interpreters of gospel, and much of The King's iconic output will be heard when the Circa '21 Dinner Playhouse hosts two October 14 performances of How Great Thou Art: The Gospel Music of Elvis Presley, a thrilling touring production boasting the talents of famed impersonator Robert Shaw and his Lonely Street Band.

From the earliest days of his boyhood until his untimely death, gospel music always held a special place in Presley's heart, and before he became the most famous entertainer the world had ever known, Elvis, as a young man, wanted nothing more than to sing bass in a gospel group. It goes without saying that Presley eventually got his wish, if more as a soloist than an ensemble member, beginning with the release of his fifth studio album His Hand in Mine. A recording that peaked at number 13 on Billboard's Top Pop Albums charts and boasted such smash hits as “Surrender” and “Crying in the Chapel,” this first Presley gospel album led to a second in 1967's How Great Thou Art, featuring classics including “Father Along,” “Stand by Me,” and the unforgettable title track. Presley went on to be as renowned for his gospel recordings as for any other genre, with the legend's equally legendary nonsecular output including “Amazing Grace,” “Swing Down Sweet Chariot,” and “Peace in the Valley” – many of which Robert Shaw and his band will perform in Circa '21's How Great Thou Art.

An Indiana native, Shaw studied at Philadelphia's University of the Arts, performed with both the Chicago and New York casts of the Tony-winning Broadway musical Million Dollar Quartet, and has performed nationally in venues including Disneyland and Oklahoma's esteemed Gaslight Theatre. In addition to Elvis, Shaw frequently plays touring engagements impersonating Johnny Cash, Bobby Darin, and both Jake and Elwood Blues of the Blues Brothers.

How Great Thou Art: The Gospel Music of Elvis Presley will be performed at 1 and 7:15 p.m. on October 14, with the matinée preceded by a noon plated lunch and the evening presentation by a 6 p.m. plated dinner. Tickets are $50.33-56.10, and more information and reservations are available by calling (309)786-7733 extension 2 and visiting Circa21.com.