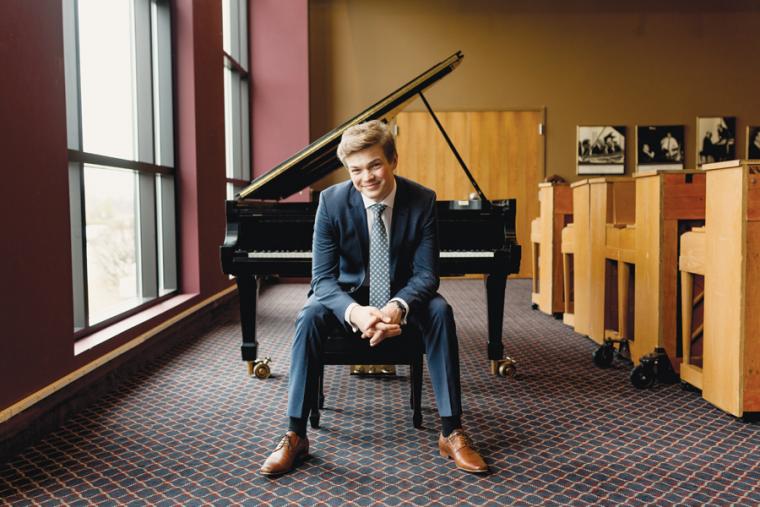 Ivan Moshchuk at the First Presbyterian Church of Davenport -- November 16.

Lauded by the Swiss newspaper Zofinger Tagblatt for his “technical perfection and extraordinary interpretation” that “lets you feel the spiritual aspects of the music,” 28-year-old classical pianist Ivan Moshchuk serves as the first guest in the First Presbyterian Church of Davenport's 2019-20 Performing Arts Series, his recital on the church's Steinway piano sure to prove why the Baltimore Sun said it would be “impossible not to be impressed” by the young man's “absorbing, dynamic music making.”

Ivan Nikolaevich Moshchuk was born in Moscow in December of 1990, and moved to Grosse Pointe, Michigan, at age four with his parents and brother after his father accepted an invitation to work at Wayne State University. Moshchuk began playing piano at the age of five, and soon after, began taking private lessons with Margarita Molchadskaya, former pedagogue of the central specialized school for gifted children at the Saint Petersburg State Conservatory. Following his concerto debut at age 11, the young pianist received numerous accolades, including First Prize at the Arthur Fraser International Piano Competition in 2007 and the 2010 Gilmore Young Artist Award. As the first Michigan resident to receive that honor, Moshchuk's citation propelled him into the music world as he went on to earn a BM from the Peabody Institute of Johns Hopkins University, where he studied music theory with Ildar Khannanov, and piano performance with Brian Ganz and Leon Fleisher.

As a recording artist, Moshchuk's debut album explored solo piano works of Beethoven and Rachmaninoff in relationship to the question of forgiveness, and his writings on music have earned him invitations to speak at international conferences, most recently at the 9th European Music Analysis Conference in Strasbourg. His second album features world premiere recordings of American-Italian composer David DiChiera and is issued on the Innova label, and Moshchuk's live performances have been broadcast on WFMT in Chicago and American Public Media's Performance Today. In 2016, Moshchuk's passion for collaboration brought him back to Detroit to create the Detroit Sessions, an initiative designed to bridge communities and elevate cultural vibrancy by bringing together different artistic disciplines in unexpected ways. The Detroit Sessions have welcomed guest artists such as Bruno Monsaingeon, have been featured on ClassicFM in London, and have collaborated with many of the major Arts organizations in the area, among them the Detroit Institute of Arts and Michigan Opera Theatre. Moshchuk is currently studying at the Accademia Nazionale di Santa Cecilia in the studio of Benedetto Lupo, and his Davenport concert will find the pianist delivering renditions of Sergei Prokofiev’s inventive Visions fugitives, Sergei Rachmaninoff’s tour-de-force Variations on a Theme of Corelli, and famous sonatas by Mozart and Beethoven.

Ivan Moshchuk performs at the First Presbyterian Church of Davenport on November 16, admission to the 7:30 p.m. concert is $10-15, and more information and tickets are available by calling (563)326-1691 or visiting FPCDavenport.org.