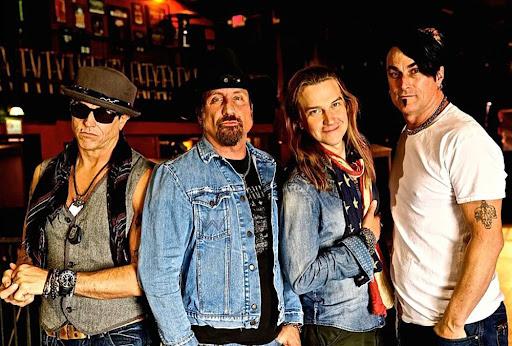 A touring engagement with the platinum-selling, chart-topping, chainsaw-playing rock and metal artists of Jackyl comes to East Moline venue The Rust Belt on October 19, its musicians not only fan favorites but the possessors of two actual Guinness World Records: one for playing 100 concerts in 50 days, and one for performing 21 concerts in a 24-hour period.

Currently composed of Jeff Worley on guitar, Roman Glick on bass, Chris Worley on drums, and lead vocalist Jesse James Dupree on guitar, tambourine, and even a gas chainsaw, Jackyl originated in 1991, and quickly signed with the noted label Geffen Records. The band's self-titled 1992 debut album quickly went platinum, and featured notable rock radio hits including “Down On Me,” “When Will It Rain,” “I Stand Alone,” and most memorably “The Lumberjack,” during which Dupree performed his now-legendary chain-saw solo. Dupree’s chain-saw escapades on the album and in concert became one of many Jackyl trademarks, and with the release of Jackyl, the musicians hit the road as touring performers, only leaving it long enough to record new albums.

The group's touring mates in its early days included Aerosmith, Kiss, ZZ Top, Ted Nugent, and Damn Yankees, and 1993 saw “Mental *@%.!” featured on The Beavis & Butt-head Experience, a compilation album of songs tied in with MTV’s hit cartoon series that was eventually certified triple platinum. Jackyl's second album Push Comes to Shove was released in 1994 and achieved gold status, and that August, the band turned in one of the most acclaimed performances at Woodstock ’94. The resulting double album Woodstock 94 went platinum and included “Headed For Destruction," a track from Push Comes to Shove.

Since then, the rockers have released a half-dozen additional studio albums, ranging from 1997's Cut the Crap (whose hit song “Locked & Loaded” featured guest vocals from AC/DC's Brian Johnson) to 2010's When Moonshine & Dynamite Collide to 2016's Rowyco, which inspired Classic Rock Revisited to state, “The world could use more bands like Jackyl.” The group has also enjoyed additional Billboard hits in singles such as 1998's “We're an American Band,” 2002's “Kill the Sunshine,” and 2013's “Favorite Sin,” plus a quintet of live and best-of albums that include Night of the Living Dead, Choice Cuts, and Live at the Full Throttle Station.

Jackyl plays its East Moline concert on October 19 with an opening set by the AC/DC tribute band Electric Shock, admission is $25.50-32.50, and more information and tickets are available by visiting TheRustBeltQC.com.