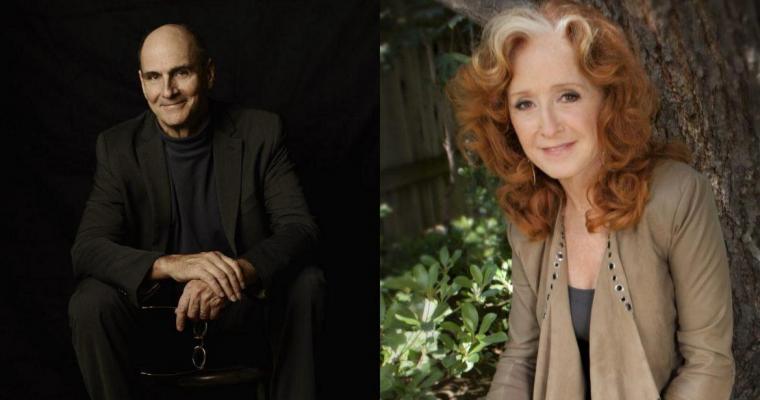 James Taylor and Bonnie Raitt at the TaxSlayer Center -- February 23.

Two legendary music icons – both of them 2000 inductees in the Rock and Roll Hall of Fame – will share the stage at Moline's TaxSlayer Center on February 23, with the venue delivering the long-awaited pairing of folk and Americana singer/songwriter James Taylor, recipient of a 2015 Presidential Medal of Freedom, and blues-rock star Bonnie Raitt, winner of the National Guitar Museum's 2017 Lifetime Achievement Award.

A five-time Grammy Award winner, Taylor is one of the best-selling music artists of all time, having sold more than 100 million records worldwide. He achieved his professional breakthrough in 1970 with the number-three single “Fire & Rain” and had his first number-one hit the following year with his recording of composer Carole King's “You've Got a Friend.” Taylor's 1976 Greatest Hits album was diamond-certified, having sold 12 million copies in the United States alone, and beginning with his 1977 release JT, and every album that he released from 1977 to 2007 sold over a million copies. He enjoyed a resurgence in chart performance during the late 1990s and 2000s when he recorded some of his most-awarded works – including the albums Hourglass, October Road, and Covers – and achieved his first number-one album in the United States with his 2015 recording Before This World. Known for his popular covers of songs such as “How Sweet It Is (To Be Loved By You” and “Handy Man,” as well as originals such as “Sweet Baby James” and “Little More Time with You,” Taylor's recent laurels include a 2014 Emmy Award and a 2016 citation at the Kennedy Center Honors.

The recipient of 10 Grammy Awards, Raitt is ranked number 50 in Rolling Stone's list of the “100 Greatest Singers of All Time,” and also made the magazine's list of the “100 Greatest Guitarists of All Time,” leading Australia's country star Graeme Connors to rave, “Bonnie Raitt does something with a lyric no one else can do; she bends it and twists it right into your heart.” During the 1970s, Raitt released a series of roots-influenced albums that incorporated elements of blues, rock, folk, and country, and in 1989, after several years of critical acclaim but little commercial success, she enjoyed a smash hit with the album Nick of Time, which topped the Billboard 200 chart, sold five million copies, and won three Grammys including Album of the Year. Raitt's next two albums, 1991's Luck of the Draw and 1994's Longing in Their Hearts, were also multi-million sellers, generating hit singles that included “Something to Talk About,” “I Can't Make You Love Me,” and the Billboard chart-topper Love Sneakin' Up on You. Since then, all five of Raitt's subsequent studio albums have landed on Billboard's top 20, with the artist's top-five singles including “One Belief Away,” “I Can't Help You Now,” and “I Will Not Be Broken.”