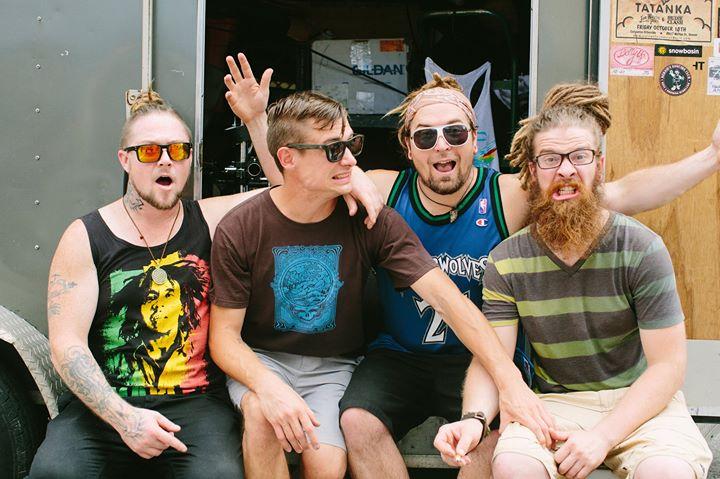 Jon Wayne & the Pain at the Redstone Room -- December 6.

Recently described by GratefulWeb.com as “the true definition of road warriors, boasting over 20 shows a month,” the eternally touring reggae artists of Jon Wayne & the Pain play a December 6 concert at Davenport's Redstone Room, sharing the exhilarating gifts that led ThePier.org to praise their output that “crosses genres with tracks that build from dub loops and explode into powerful party anthems.”

Based in Minneapolis and composed of forntman Jon Weight (lead vocals and acoustic guitar), Chuckie Torgerson (bass), Teeto Miller (drums), and Weston Schick (electric wind instruments and keyboards), the electronic reggae-dub innovators of Jon Wayne & the Pain have been mesmerizing fans for nearly a decade with their signature blend of electronic beats fused with upbeat roots-reggae music and a psychedelic funk. The Twin Cities-based ensemble burst onto the scene in 2007, following their debut of their self-titled album, and since then have been building a dedicated Midwest fan following through extensive touring, influential songwriting, and multi-dimensional jamming. Currently playing more than 130 shows per year, Jon Wayne & the Pain has performed at some of the nation's most renowned music and art festivals, among them Electric Forest, Summer Camp, Cali Roots, and Wakarusa, and has twice sold out concerts at the Minneapolis venue The Cabooze, with more than 1,000 fans in attendance both nights.

In addition to releasing the live albums Live from Moscow in 2011 and Live from the District in 2014, the band's discography includes 2010's Follow Through, 2013's Surrender, and last year's Your Vibe Attracts Your Tribe, the latter of which hit number-seven on iTunes' Reggae Albums chart and number-14 on Billboard's Reggae Albums chart. The recording has also earned Jon Wayne & the Pain some of its strongest reviews to date. Broadway World praised the “highly evolved new album” and the band's “fresh and current sound,” while TopShelfReggae.com wrote that Your Vibe Attracts Your Tribe boasts “so many twists and turns when it comes to genre-bending” that “any music lover won't be disappointed.”

Jon Wayne & the Pain perform their December 6 concert at the Redstone Room with an opening set by The Uniphonics, admission to the 8 p.m. show is $10, and more information and tickets are available by calling (563)326-7832 or visiting RiverMusicExperience.org.