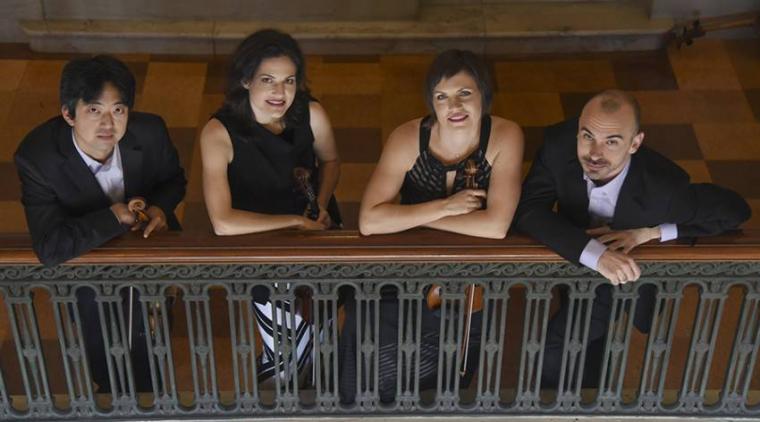 With The New Yorker deeming the group “an ensemble of eloquent intensity” and “one of the mainstays of the American chamber-music scene,” the gifted musicians of the Jupiter String Quartet appear as special guests in the WVIK/QCSO Signature Series, their February 15 performance at Augustana College's Centennial Hall sure to deliver what the Boston Classical Review called “an intensely alert investigation of the musical possibilities in each work.”

The performers' chamber-music honors and awards include the grand prizes in the Banff International String Quartet Competition and the Fischoff National Chamber Music Competition in 2004, and the following year, they won the Young Concert Artists International auditions in New York City, which quickly led to a busy touring schedule. They consequently received the Cleveland Quartet Award from Chamber Music America in 2007 and an Avery Fisher Career Grant in 2008, and from 2007 to 2010, the Jupiter String Quartet was in residence at the Chamber Music Society of Lincoln Center’s Chamber Music Two. In 20912, the musicians were appointed as artists-in-residence and faculty at the University of Illinois, where they continue to perform regularly in the beautiful Krannert Center for the Performing Arts, maintain private studios, and direct the chamber music program. Reviewing a recent concert event, the Cleveland Plain Dealer called the group “an alert and energetic ensemble with plenty of communication and an individual sonic sheen that was at once light and, when called for, warm and burnished.”

The Jupiter String Quartet headlines the third WVIK/QCSO Signature Series concert of the 2019-20 season on February 15, admission to the 7:30 p.m. event is $10-25, and more information and tickets are available by calling (563)322-7276 or visiting QCSO.org.