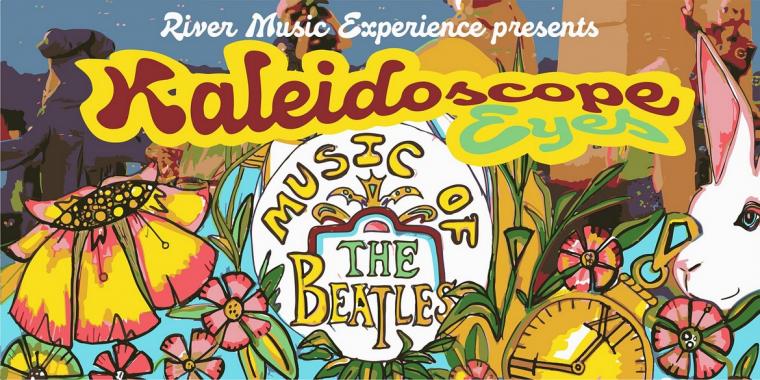 In Rock Island's Schwiebert Riverfront Park on June 26, Davenport's River Music Experience will amass the Quad Cities' creative power for an All Sweat Beatles tribute like never seen before in Kaleidoscope Eyes: Music of the Beatles, with musical performances from more than two dozen area musicians accompanied by performances from AcroYoga Quad Cities’ circus and flow artists and members of Quad City Symphony Orchestra.

Revered for more iconic pop tunes than any band in world history, the Beatles are the best-selling music act of all time, with estimated sales of 600 million units worldwide. They hold the record for most number-one albums on Billboard's U.K. Albums Chart (15), the most number-one hits on the Billboard Hot 100 (20), and the most singles sold in the U.K. (21.9 million). Among the Beatles' accolades are seven Grammy Awards; four Brit Awards; an Academy Award for Best Original Song Score for the 1970 documentary Let It Be; and 15 Ivor Novello Awards. They were inducted into the Rock and Roll Hall of Fame in 1988, and each principal member – hose being, of course, John Lennon, Paul McCartney, Ringo Starr, and George Harrison – was inducted individually between 1994 and 2015. In 2004 and 2011, the Beatles also topped Rolling Stone's lists of the greatest artists in history.

A live-music project started in 2016 by The Candymakers' Alan Sweet, All Sweat Productions was designed to gather musicians from throughout the Quad Cities area – all known for different groups and genres – over a shared love of some of some of the most iconic bands, moments, and albums in the history of music. Past All Sweat shows have included tributes to the Beatles' Abbey Road, Prince's Purple Rain, and The Band's The Last Waltz, as well as legendary musical artists including Aretha Franklin, James Brown, Eric Clapton, and Green Day.

Designed as a premier acrobatic and circus-arts troupe offering live-event performance, weekly classes, and traveling workshops from a yogic perspective, AcroYoga Quad Cities also originated in 2016, and since its official local debut in 2018, has brought in one-of-a-kind instructors from a variety of acrobatic and therapeutic backgrounds to guide students through experiences that benefit the mind, body, and soul. AYQC is a “floating studio” serving the Quad Cities with acroyoga classes, jams, workshops, and entertainment booking, and the company also acts as a regional hub for the practice of AcroYoga, extending in a 100-mile radius of the Quad Cities metro area across Eastern Iowa and Western Illinois. The group's director and lead teacher Nikki Jones was a competitive stunt cheerleader in high school and company dancer in college before her path led her to music festivals, where she was introduced to flow arts, burlesque, and contemporary belly dance.

Kaleidoscope Eyes: Music of the Beatles will take place in Schwiebert Riverfront Park from 6:30 to 9:30 p.m. on June 26, admission is $12, and the outdoor area will be transformed into a unique landscape with help from Rock Island Parks, Rexroat Sound, and Bent River. Attendees are encouraged to bring blankets and/or camp chairs for seating, no outside food or drink allowed, and more information on the night is available by calling (563)326-1333 and visiting RiverMusicExperience.org.