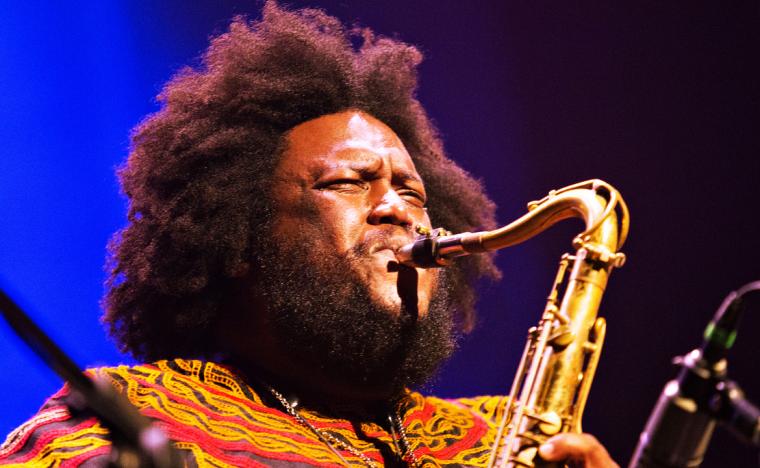 With his 2018 album Heaven & Earth praised by The Guardian for its “purposeful vitality” and described by Pitchfork as “far and away the strongest musical statement of his career,” the thrillingly gifted saxophonist, composer, and bandleader Kamasi Washington headlines a special March 3 concert at East Moline's The Rust Belt, a night sure to demonstrate why Rolling Stone labeled the artist “the most talked-about jazz musician in recent memory.”

Born in Los Angeles to musical parents and educators in 1981, Washington was raised in Inglewood, California, and was a graduate of the Academy of Music of Alexander Hamilton High School in Beverlywood. Upon graduation, he enrolled in UCLA's Department of Ethnomusicology, where he began playing with faculty members such as Kenny Burrell, Billy Higgins, and trumpeter Gerald Wilson, performing on the album Young Jazz Giants in 2004. While in his 20s and 30s, Washington performed alongside a diverse group of musicians including Wayne Shorter, Herbie Hancock, Lauryn Hill, Snoop Dogg, and Chaka Khan, and also played saxophone on Kendrick Lamar's album To Pimp a Butterfly. But with the release of his debut solo The Epic, Washington was instantly set on a path as the modern generation’s torchbearer for progressive, improvisational music that would open the door for young audiences to experience music unlike anything they had heard before

A 172-minute odyssey featuring his 10-piece band The Next Step, The Epic boasts elements of hip-hop, classical, and R&B music, all major influences on the young saxophonist and bandleader who has continually exceeded any notions of what “jazz” music is. Released to critical acclaim with Pitchfork calling it “a large and generous canvas with the feel of a generational intervention,” The Epic won numerous awards including the inaugural American Music Prize and the Gilles Peterson Worldwide album of the year citation. Washington followed that work with collaborations with other influential artists such as John Legend, Run the Jewels, and Ibeyi, and was instrumental in the creation of “Harmony of Difference,” a standalone multimedia installation during the prestigious 2017 Biennial at the Whitney Museum of American Art in New York City. And since the release of Heaven & Earth, the artist's mass appeal has continued to grow, with Washington drawing multi-ethnic and multi-generational crowds in solo performances and at prominent music festivals including Coachella, Glastonbury, Fuji Rock, Bonnaroo, and Primavera.

Kamasi Washington performs his East Moline concert on March 3, admission to the 8 p.m. show is $27-40, and more information and tickets are available by visiting TheRustBeltQC.com.