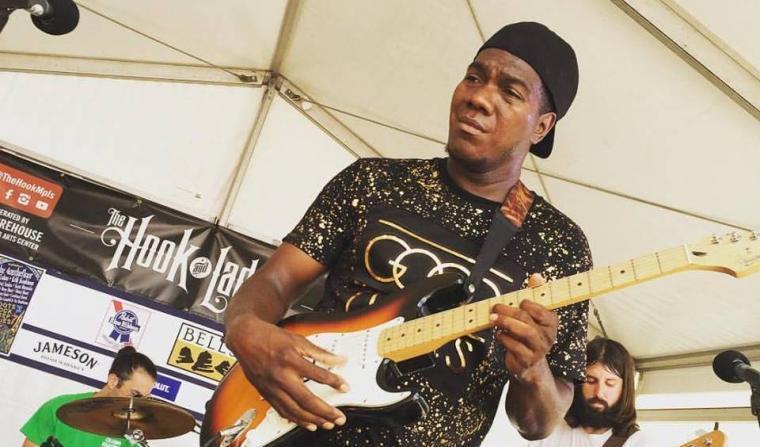 With Philly Cheeze Blues' Phillip Smith raving that the musician's My World Is So Cold album boasts "a bus load of soul," adding "I love the funky guitar riffs and the infectious rhythm," blues guitarist extraordinaire Kent Burnside headlines a January 27 concert at Davenport's Gypsy Highway Bar & Grill, the artist the oldest grandson and one of the closest pupils of the legendary R.L. Burnside.

Born in 1971 in Memphis, Tennessee and spending his early years in Holly Springs, Mississippi, Burnside first heard the blues while watching his grandfather perform for Mississippi locals on the family farm. Kent used to sell sandwiches to audience members for a dollar a piece during these performances, and the first lesson R.L. taught his grandson, Burnside recalls, was that "to be a bluesman, you have to find your own rhythm on the guitar. You can’t play someone else’s rhythm – as rhythm comes from your heart." The younger Burnside got his first start in the music business playing with blues icon Jimbo Mathus and going on tour with Buddy Guy in the early 2000s. That was when he started developing his signature style of blues: dark, hypnotic, inviting, and very danceable.

Burnside made his debut as headliner of the blues outfit Kent Burnside & the New Generation in California in 2006, and in addition to frequent national tours, the band released a pair of lauded albums in Cotton Field Disco and Country Boy with City Dreams. The blues artist also made his solo-album debut in 2014 with My World Is So Cold, a recording that inspired Blues Rock Review to write: “You have to ask yourself: Is Kent Burnside really worthy of attention and not simply because of a connection to another famous musician? The answer here is definitely yes. Kent has a unique sound that brings together that Mississippi influence of his heritage with a bit of modern sound for something that is uniquely his own.” Over the course of his career, also worked with Samuel L. Jackson to help the actor prepare for his role in 2007's Black Snake Moan, and he has collaborated on the Blues Brothers’ stage shows alongside Elwood Blues himself, Dan Aykroyd.

Kent Burnside plays his Gypsy Highway Bar & Grill headlining engagement on January 27, admission to the 6:30 p.m. concert is $8 at the door, and more information on the evening is available by calling (563)232-8890 and visiting TheGypsyHighway.com.