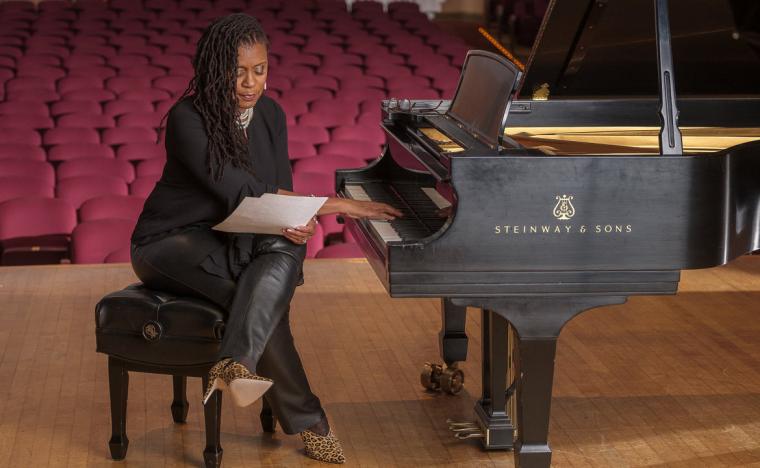 Praised by the Washington Post for her “astonishing voice” and “undeniable ingenuity,” lauded jazz singer and music educator Lenora Zenzalai Helm and her ensemble headline a special, virtual concert hosted by the Polyrhythms Third Sunday Jazz Series, the July 26 evening with the Lenora Zenzalai Helm Tribe & Jazz Orchestra showcasing a performer who, according to the New York Daily News, “has a fistful of jazz and world rhythms in her pocket and some glorious songs in her soul.”

Throughout more than 30 years of musical achievements as a vocalist specializing in classic, traditional, standard jazz, Helm has toured, recorded, and performed with renowned artists around the world. She has also been a quarter-finalist for the Grammy Music Educator of the Year Award, a Salzburg Global Citizenship Fellow, a UNC Global Educator Fellow, a Fulbright Senior Music Specialist, and the former U.S. Jazz Ambassador under the State Department and Kennedy Center. Leadership roles in jazz include, Vice President, Area Unit Leadership, North Carolina, for Jazz Lenora’s CD, I Love Myself When I’m Laughing, meanwhile, was listed on Independent Ear’s “30 recommended 2012 Record Releases,” and her seventh release For the Love of Big Band – the title of her Polyrhythms concert – was released last fall.

A recognized force in music education, Helm holds a Master of Music in Jazz Performance from East Carolina University and a Bachelor of Music in Film Scoring and Vocal Performance from Berklee College of Music. She currently serves as an Assistant Professor in the Department of Music and Jazz Studies Program for the College of Arts and Sciences at North Carolina University, and under her direction, NCCU’s Vocal Jazz Ensemble received the Best Choir 2018-19 award from HBCU Digest. Outside of the classroom, Helm has performed as a soloist, composer, and bandleader since 1983, and has collaborated with such jazz greats as Donald Brown, Ron Carter, Andrew Hill, David Liebman, Stanley Cowell and others. Along with headlining at Lincoln Center, she was a featured guest artist with the Durham Symphony, and Helm has enjoyed leading roles in theatre productions including Aldonza in Man of La Mancha and Queen of the Night in Mozart’s The Magic Flute.

The July 26 concert with the Lenora Zenzalai Helm Tribe & Jazz Orchestra begins at 6 p.m., with pre-show entertainment beginning at 5:30 p.m. For more information and to view Helm's performance, visit the event's Facebook page.