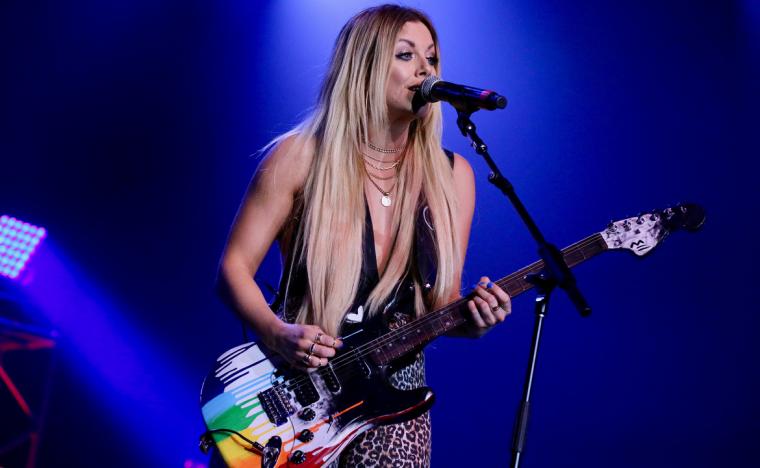 A chart-topping country-music singer/songwriter described by RoughStock.com as “one of Nashville's most talented and loved artists,” Lindsay Ell headlines a May 25 concert at Davenport's Rhythm City Casino Resort Event Center, sharing the soulful talents that led Taste of Country to rave, “There's not another active female in country to compare her to.”

Recently named one of The Huffington Post's “Top Country Artists to Watch,” the 30-year-old Ell is a native of Calgary, Alberta, Canada, who learned to play guitar while traveling with her father to country-bluegrass camps as a young girl. Ell honed her craft as a musical stylist and songwriter after being discovered by Randy Bachman at age 15, with the lead guitarist for Bachman-Turner Overdrive and The Guess Who calling her “the most talented and multi-faceted artist I've come across in many years.” Bachman co-wrote and produced her first album Consider This, for which Ell herself co-wrote most of the 11 songs, and following its 2008 debut, the young artist went on to tour with blues legend Buddy Guy. A second album, Alone, was released in 2009, and after turning 21 the following year, Ell moved to Nashville and signed with Stoney Creek Records, for whom she still records today.

In December of 2013, Ell's first official single, “Trippin' on Us,” debuted as the most added song for country music radio in both Canada and the United States with over 50 first-week adds,” with the artist subsequently called “a true triple threat” by Guitar World, “a star in the making” by Taste of Country, and “a distinct figure in the modern country recording camp” by Country Weekly. Ell made her Grand Ole Opry debut in 2014, and since then has released two additional albums – 2017's number-one Billboard hit The Project and 2018's The Continuum Project – in addition to the six-song EP Worth the Wait, with her 2017 single “Criminal” Ell's first chart-topping song on the Canadian country charts. In recent years, Ell has also toured alongside the likes of Keith Urban, Luke Bryan, Gretchen Wilson, and Chris Isaak, and she has been nominated for seven Canadian Country Music Association Awards, winning Alberta's Association of Country Music Artists Award for “Female Artist of the Year.”

Lindsay Ell plays her May 25 concert at the Rhythm City Casino Resort's Event Center alongside special guest Nora Collins, admission to the 8 p.m. show is $25-35, and more information and tickets are available by calling (844)852-4386 or visiting RhythmCityCasino.com.