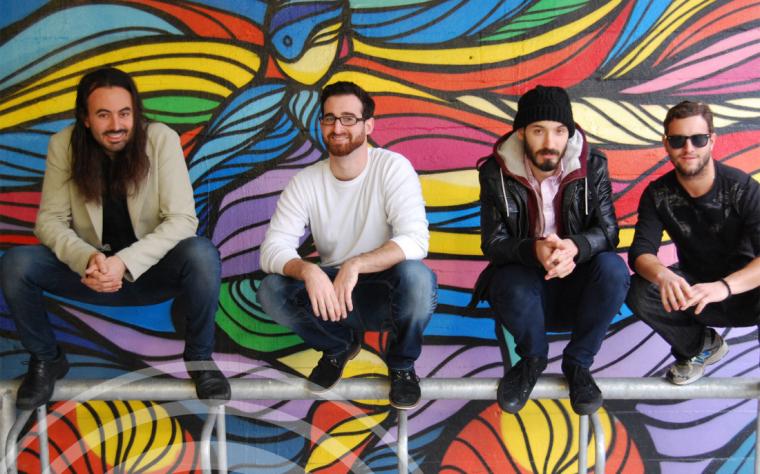 Marbin at the Redstone Room -- September 13.

Lauded by Sound Guardian as “a truly great and powerful band” and Icon Music Mag as “everything you could wish for in rock, jazz, fusion, blues, prog rock, and world music,” the Chicago-based quartet Marbin plays a Redstone Room concert on September 13, the band's most recent release Israeli Jazz praised by Festival Feak as an album that “tends to speed by at a frenetic pace, but never goes without some form of infectious melody that climbs and climbs, as if reaching for the next high.”

Marbin was founded in 2007 by saxophonist Danny Markovitch and guitarist Dani Rabin, who met in Israel after Markovitch completed his military service as an infantry sergeant and Rabin had graduated from Boston's Berklee College of Music. After moving to Chicago, they released Marbin's self-titled debut album in 2009, and were asked to join a band led by Paul Wertico, a drummer from Chicago who had been a member of the Pat Metheny Group. Wertico subsequently introduced the Marbin musicians to bassist Steve Rodby, who had also been a member of the Pat Metheny Group, and together they recorded Marbin's 2011 sophomore release. Wertico and Rodby also appeared as guests on Marbin's next album, 2013's Last Chapter of Dreaming, which was recorded by Markovitch, Rabin, Jae Gentile, and Justyn Lawrence, the same members who released 2014's live album The Third Set. The membership changed for 2014's Aggressive Hippies, with Markovitch and Rabin joined by Greg Essig and John Lauler, and bassist Jon Nadel and Drummer Blake Jiracek took over for Marbin's most recent works: 2016's Goatman & the House of the Dead and this past spring's Israeli Jazz.

In addition to their regular schedule playing top venues and festivals in the U.S. that have included the Chicago Jazz Festival, The Jazz Showcase, and Magic Bag, Marbin toured with the fusion super-group of Scott Henderson, Mike Clark, and Jeff Berlin in 2011 and Alan Holdsworth's trio in 2012. Also sharing stages with the likes of Wayne Krantz, Tim Lefebvre, and Nate Wood, the quartet has been the collective beneficiary of rave reviews nationwide. SomethingElseReviews.com called Marbin “a crazy-talented group making music that's hard to pin down but easy to appreciate,” and 69 Faces of Rock stated, “Marbin is capable of composing pieces that shatter your soul to pieces, and then rebuild it with a fortress-like strength.”

Marbin performs its September 13 concert with an opening set by Greek Medallion, admission is $8-10, and more information and tickets are available by calling (563)326-1333 or visiting RiverMusicExperience.