Matt Barber's “The Song Is You” Album-Release Show, November 25 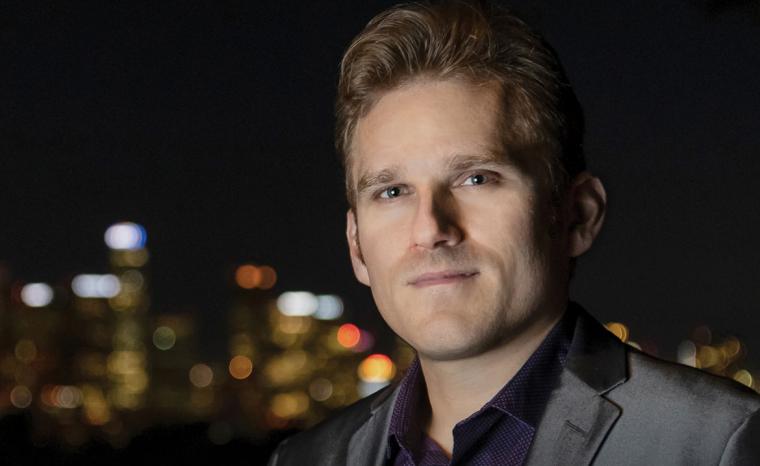 Matt Barber's “The Song Is You” Album-Release Show at the Grape Life Wine Store & Lounge -- November 25.

A popular entertainer and 2005 graduate of Rock Island High School returns to Davenport's Grape Life Wine Store & Lounge on November 25 in support of his new album The Song Is You, with Matt Barber performing an intoxicating repertoire of jazz, pop, '50s-'70s classics, and seasonal favorites alongside musicians Dick Watson on piano, Dale Newlin on drums, and Mike VanSpeybroeck on saxophone.

With his traditional song list boasting standards by Frank Sinatra, Andy Williams, Nat King Cole, Barber's father Mark was a longtime radio personality on Davenport's KUUL-FM, and helped manage Matt when he started performing during his days at Rock Island High School. In 2005, the younger Barber went on the road, playing in numerous coffee houses, cafés, and wherever he could from Los Angeles to New York City. Over the years since, Barber's music has been featured on Los Angeles jazz radio station KKJZ (KJAZZ) 88.1 FM, and he has had the honor of performing at such notable venues as The Four Seasons Hotel in Beverly Hills, Andy Williams’ Moon River Restaurant in Branson, and at the Illinois State Fair.

Barber recorded his album debut Romancing Nashville in 2007, following it with Love Notes from Paradise in 2009, It's Been a Merry Christmas in 2009, The Masterpiece Collection in 2011, More Today Than Yesterday in 2015, and Moments in Time in 2018 prior to the release of his new The Song Is You. And while Barber performs beloved standards, his repertoire also runs the gamut of musical genres, with his albums also boasting covers of everything from Barry Manilow's “Copacabana” to Judy Garland's “Over the Rainbow” to the Righteous Brothers' “Unchained Melody” to Tony Bennett's “I Left My Heart in San Francisco.” 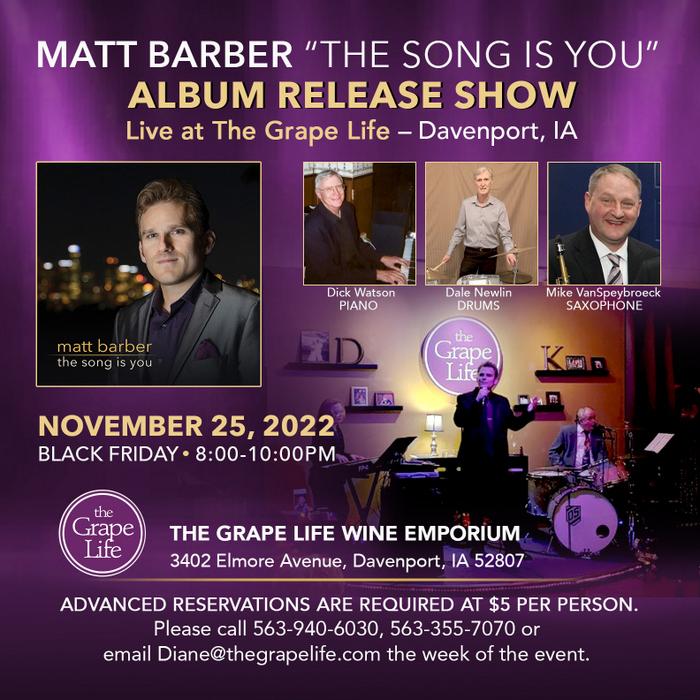 In addition to touring alongside fellow musicians in the Matt Barber Trio and the Matt Barber Experience, the artist has frequently performed alongside singer/songwriter and multi-instrumentalist Brother Day Kelly – famed for his work with Stevie Wonder, James Brown, and the Ray Charles Orchestra – as “The Jazz Brothers,” with which Barber accompanied by Day on vocals, trumpet, and soprano saxophone. He has also been a co-star in the long-running touring production Love Is a 4-Letter Word, a musical comedy in which Barber and his co-stars croon such timeless hits as “Moon River,” How Do You Keep the Music Playing,” and the Sinatra classic “My Way.”

Matt Barber's The Song Is You Album-Release Show will be held at the Grape Life Wine Store & Lounge from 8 to 10 p.m. on November 25, admission is $5, and advance reservations are required. For more information and tickets, call (563)940-6030 or (563)355-7070 or e-mail Diane@thegrapelife.com the week of the event, and visit TheGrapeLife.com.