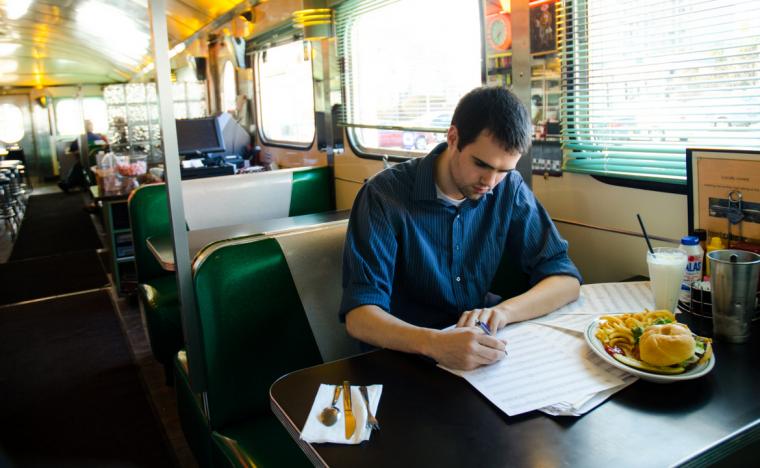 A composer, improviser, and teacher, Conrad recently completed his Doctor of Arts in Jazz Studies from the University of Northern Colorado, and earned his Master’s degree in Jazz Composition and Arranging from the prestigious Eastman School of Music, where he played lead trombone in the Eastman Jazz Ensemble. Before that, he graduated from the University of Northern Iowa with Bachelor's degrees in Music Education: Jazz Studies and Music Composition and Theory. Conrad’s arrangements have been performed all around the world, including in a 2014 premiere at Carnegie Hall and a performance at President Barack Obama's inauguration in 2013. Other career highlights include participation in the 2017 Metropole Orchestra Arrangers Workshop with Vince Mendoza, and winning second prize in the “Spheres of a Genius” composition competition through the Vienna Radio Symphony.

Currently serving as Assistant Professor of Jazz Studies & Music Education at the University of Northern Iowa, Conrad has toured China, played at the Umbria Jazz Festival in Perugia, Italy, and appeared at various jazz festivals and venues all over the United States. Among the ensembles he has performed with are the Alexa Tarantino Quintet and Christopher’s Very Happy Band, and Conrad has been recognized for his arranging and composing with four ASCAP Herb Alpert Young Jazz Composer Awards and seven DownBeat Awards, as well as citations and commissions from organizations such as the West Point Jazz Knights and American Society of Music Arrangers and Composers.

Since completing his doctorate, Conrad has resurrected Iowa's premier large-jazz ensemble COLOSSUS under the moniker Mike Conrad & the Iowa Jazz Composers Orchestra, and has entrusted the group with a new mission: to showcase the best jazz musicians and jazz composers that the state of Iowa has to offer. Conrad and the Iowa Jazz Composers Orchestra want to show people in Iowa and beyond that they don’t need to look to New York City or Chicago for beautiful, high-quality, creative music, and among the composers featured are Chris Merz, Bob Washut, John Rapson, Ryan Kisor, Nate Sparks, Paul Lichty, and Conrad himself. The band roster, meanwhile, features Robert Espe, Jen Tiede, Chris Merz, Nolan Schroeder, and Simon Harding on saxophones, Cory Schmitt, Dave Rezek, Jon Ailabouni, and Steve Wheeler on trumpets, Anthony Williams, Rich Medd, Joel Nagel, and Zack Morton on trumpets, and Steve Grismore, Michael Conrad, Drew Morton, and Dave Tiede serving as rhythm section. Says Polyrhythms director Nate Lawrence, “Polyrhythms is very pleased and honored to collaborate with Mike Conrad, who has long been a good friend, staunch supporter and great performer for our Third Sunday Jazz series.”

Mike Conrad & the Iowa Jazz Composers Orchestra plays the Redstone Room at 6 p.m. on January 19, and the concert will be preceded by a 3 p.m. “Jazz Demystifying” workshop devoted to the compositional process. Admission is $10-15 for the evening performance, with the workshop $5 for adults and free for students, and tickets and information are available by contacting Polyrhythms at (309)373-0790 or Polyrhythms.org. or the Redstone Room at (563)326-1333 or RiverMusicExperience.org.