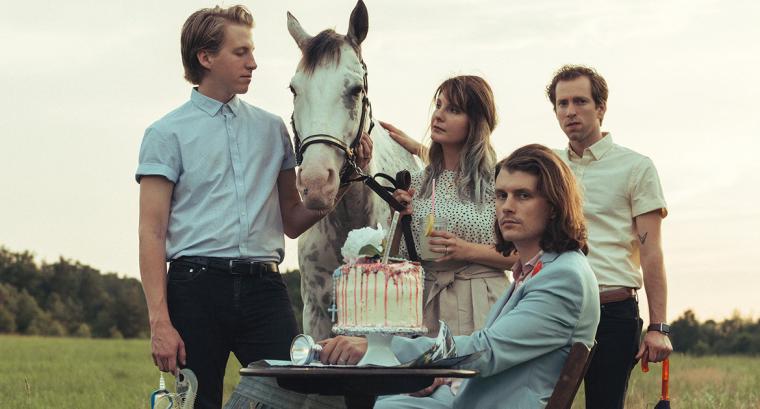 Mike Mains & the Branches at the Raccoon Motel -- January 26.

With SputnikMusic.com praising their most recent album When We Were in Love as “larger than life in its indie-pop/rock sound,” adding that “shimmering synth, strong vocals, and endless energy are all constants throughout,” Mike Mains & the Branches headline a January 26 concert at Davenport's Raccoon Motel, the indie musicians described by Sunlight magazine as “a powerhouse of a band both in sound and lyrics.”

Currently a quintet composed of married talents Mike Mains (guitar, lead vocals) and Shannon Mains (guitar, keys, mandolin, saxophone), Robbie Barnett (drums) and Allison Barnett (bass), and Alex Hirlinger (guitar), Mike Mains & the Branches was formed in Gainesville, Texas, in 2009, by Mains and David Denison. The two were soon joined by Jacob Burkhart and Mains' future wife, Shannon Briggs, and after determining to pursue music full-time, the band relocated to Mike and Shannon's home state of Michigan. The band's debut album Home, which was released independently in June of 2012, produced a music-video hit with the song "Stereo," leading TVU's music-countdown show Ten Most Wanted to name it the "Most Wanted" video of its year. Touring consistently for over a year in support of their debut, Mike Mains & the Branches become known for their energetic live performances, and in 2012, they played the Main Stage at the final year of Cornerstone Music Festival, with post-event coverage for Cornerstone's Web site regarding the ensemble as the "Best Show, All Around" of the festival.

In the spring of 2013, the band launched a successful crowdfunding campaign through PledgeMusic and began recording new material for a follow-up album, with the first of the new songs released on the Everything EP just before the start of Mike Mains & the Branches' fall tour with The Orphan, The Poet, and The American Opera. In February of 2014, the band released their completed sophomore album Calm Down, Everything Is Fine, which The Soul of a Clown magazine lauded as a "brilliant album" boasting "a punk ethic and an indie feel." After four more years of touring and festival performances, the band announced that they had signed with Tooth & Nail Records in 2018 and launched another successful crowdfunding campaign to help fund their third studio album, When We Were in Love. The recording was eventually released in April of 2019 and was an immediate critical success, with Billboard praising the recording for its “buoyant pop” and Atwood lauding it for its “upbeat, energetic, feel-good rock.”

Mike Mains & the Branches perform their Davenport engagement at on January 26, admission to the 7 p.m. concert is $15, and more information and tickets are available by visiting TheRaccoonMotel.com.