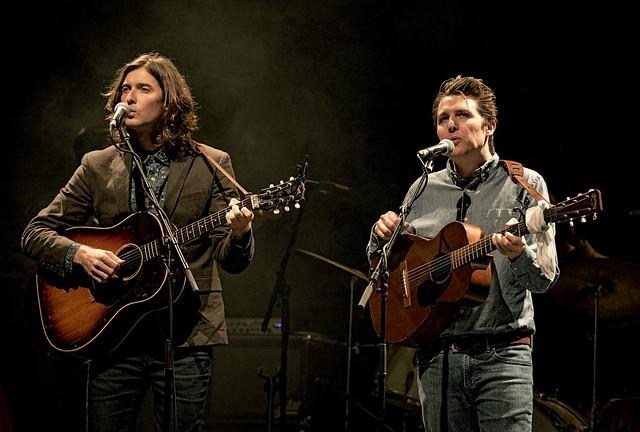 The Englert Theatre presents The Milk Carton Kids -- May 13.

Performing a livestreamed concert set spanning their works from 2015 to 2019, the Grammy-nominated indie-folk artists of The Milk Carton Kids – singer/guitarists Kenneth Pattengale and Joey Ryan – headline a special May 13 presentation hosted by Iowa City's Englert Theatre, with the artists performing songs from their most recent recorded collaborations Monterey, All the Things That I Did & All the Things That I Didn't Do, and The Only Ones.

Pattengale and Ryan formed their musical duo after Ryan attended one of Pattengale's solo performances in their shared hometown of Eagle Rock, California. The Milk Carton Kids subsequently came together after both artists reached a professional crossroads in their largely unsuccessful solo careers, eventually releasing their debut Retrospect, a live album recorded at Ventura, California's Zoey's Cafe in March of 2011. Predating the official band moniker and released under Pattengale and Ryan's own names, Retrospect led to the musicians performing at SXSW and joining Joe Purdy's North American tour as his opening act and backing band. Debuting that July, sophomore effort Prologue was the Milk Carton Kids' first studio album and the first release under the band's name, a recording the San Francisco Chronicle described as "bittersweet and beautiful." Its inclusion "There By Your Side," meanwhile, was named National Public Radio's Song of the Day and made year-end best lists with Daytrotter and American Songwriter, with the Milk Carton Kids headlining their first North American tour after Prologue’s release.

The duo's third recording The Ash & Clay, which earned the Milk Carton Kids a Grammy nomination for Best Folk Album, led to Pattengale and Ryan touring with Austin-based artist Sara Jarosz, a November taping of Austin City Limits, and selection by the Americana Music Association as Duo/Group of the Year. In 2015, Monterey earned the artists some of their strongest reviews, as Rolling Stone labeled the album a “beautifully realized folk recording” and Paste magazine called it “exquisite.” Since then, the Milk Carton Kids have released two other critically acclaimed albums in 2018's All the Things That I Did & All the Things That I Didn't Do and 2019's The Only Ones, and in addition to their TV and radio performances on such programs as Conan, CBS This Morning, and A Prairie Home Companion, the Milk Carton Kids were featured in T Bone Burnett's and the Coen Brothers' concert-film documentary Another Day/Another Time: Celebrating the Music of Inside Llewyn Davis alongside Joan Baez, Jack White, and many other folk-music luminaries.