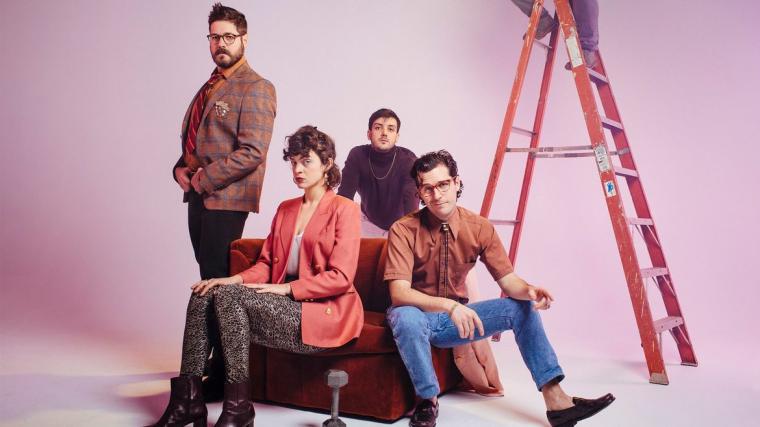 Mipso at the Raccoon Motel -- September 23.

Touring in support of their most recent, self-titled album lauded by American Songwriter as "a sonic excursison" that "transforms folk tunes into hypnotic charmers," the chart-topping indie-folk and bluegrass artists of Mipso play a September 23 concert at Davenport's Raccoon Motel, their latest recording a work in which, according to Paste magazine, "the Americana quartet finds warmth in sticking together."

A North Carolina quartet known for combining a traditional string-band format with close harmony and a variety of modern influences. Mipso is made up of vocalists and musicians Wood Robinson (bass), Jacob Sharp (mandolin), Joseph Terrell (guitar) and Libby Rodenbough (fiddle). While students at UNC-Chapel Hill, Terrell and Sharp began performing at open-mic nights as an acoustic duo. Having the idea of forming a band to play folk and bluegrass, they approached Robinson, with whom Terrell had previously performed in the campus party band Funkosaurus Rex. Billed as "Mipso Trio," the group began performing in 2011 at campus events and occasionally around North Carolina. After partnering with local Chapel Hill record label Robust Records, the group recorded the album Long, Long Gone in 2012 and began performing regularly with their mutual friend Rodenbough. Mipso Trio quickly became a campus staple known for its many sold-out performances at the historic Cat's Cradle in Carrboro; for bridging the divide between the UNC music community and the broader music scene of North Carolina's Triangle; and for performing with members of the Red Clay Ramblers and former Chancellor of UNC-Chapel Hill Holden Thorp on numerous occasions.

Upon graduation from UNC in 2013, Terrell, Sharp, and Robinson traveled on a two-week tour of Japan, including performances at the 43rd annual Takarazuka Bluegrass Festival and a concert at Tokyo's historic country music venue Rocky Top. The same year saw them release Dark Holler Pop under their newly truncated band name Mipso. Produced by Andrew Marlin and featuring members of Chatham County Line, Town Mountain, and Mandolin Orange, Dark Holler Pop was an exploration of bluegrass instrumentation and arrangements, with most songs featuring banjo and fiddle. The album was a surprise success, appearing on Billboard's Bluegrass chart and raising the band's profile considerably. In 2014, the group continued to tour and develop its sound, adding frequent collaborator Rodenbough as a full-time member, and with the 2015 release Old Time Reverie – a recording that debuted atop Billboard's Bluegrass chart – Mipso expanded into richer, occasionally darker, textures, adding the clawhammer banjo and electric organ. Since then, Mipso has enjoyed a number-three hit with 2017's Coming Down the Mountain and a number-one smash with 2018's Edges Run, with the latter's single "People Change" a sensation that has been streamed on Spotify more than 72 million times on to date.

Mipso plays their Davenport engagement on September 23, admission to the 8 p.m. concert is $15, and more information and tickets are available by visiting TheRaccoonMotel.com.