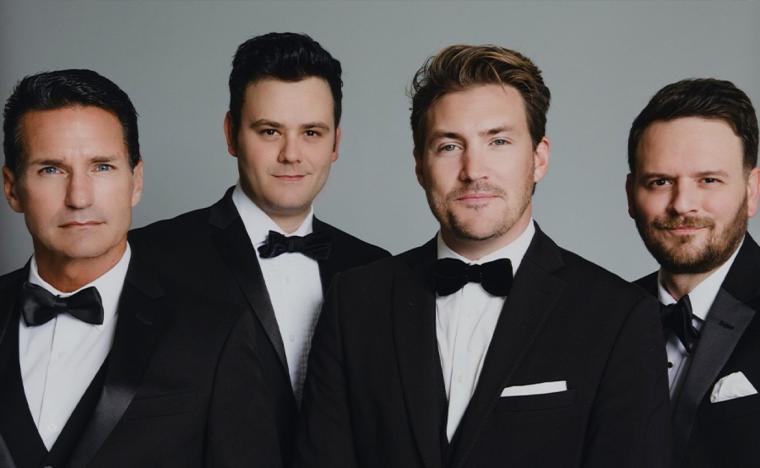 With the members of their gifted quartet all personally chosen by Frankie Valli to join his iconic band The Four Seasons, Landon Beard, Todd Fournier, and brothers Brian and Brandon Brigham – known collectively as The Modern Gentlemen – headline a highly anticipated Bally's Quad Cities concert on September 30, their repertoire of timeless pop hits including everything from the Beatles' “Help” to the Beach Boys' “California Girls” to the Four Seasons' own “December, 1963 (Oh, What a Night).”

With Valli giving his blessing for the four singers to start their own group devoted to performing classics from the Great American Pop songbook, The Modern Gentlemen have performed on some of the world’s biggest stages, from multiple sold-out concert tours in London's Royal Albert Hall with the London Symphony Orchestra to the BBC Proms in the Park for more than 40,000 people. They entertained masses in Washington D.C.'s A Capitol Fourth event alongside Michael McDonald, Patti LaBelle, John Williams, and others, and enjoyed two limited engagements on the Broadway stage, in addition to touring throughout the U.S., U.K., Canada, Asia, Israel, Italy, Australia, and New Zealand. As favorites of PBS audiences, they've starred on two nationwide specials, and have had the honor of sharing stages with the likes of the Beach Boys, the Manhattan Transfer, Sheena Easton, and Jim Brickman.

In addition to headlining in Las Vegas and having their own residency in Atlantic City, the Modern Gentlemen have performed for presidents of the United States and Prince William, the Prince of Wales, at the esteemed Arts Club in London. The group has also released three full-length studio albums: The Modern Gentlemen: Volume 1, You Make It Feel Like Christmas, and their most recent recording Happiest Days. Apart from their work as a group, each individual Gentleman also boasts a resume of significant stage credits, with Brian Brigham seen in Jesus Christ Superstar opposite Jack Black; Brandon Brigham a performer in Footloose and Grease; Landon Beard in a New York production of Altar Boyz; and Todd Fournier a veteran of Chess and Oklahoma!

The Modern Gentlemen play the Event Center of Bally' Quad Cities on September 30, admission to the 7 p.m. concert is $20-30, and more information and tickets are available by calling (800)477-7747 and visiting Casinos.Ballys.com/quad-cities.