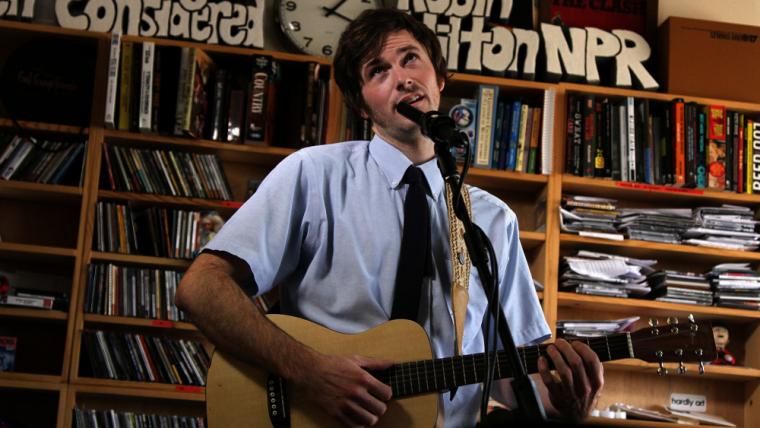 Performing a Moeller Nights concert on October 11, the Heligoats – what NPR called “a strange name for a guy strumming a guitar, but oddly befitting someone who stuffs his songs with so many sideways ideas and observations” – delivers acoustic indie rock courtesy of singer/songwriter Chris Otepka, whom NPR declared “writes songs that are brainy in the best way: clever without straining for cuteness, wry but never smug.”

Currently based in Bellingham, Washington, the Heligoats was Otepka's debut songwriting outlet. He wrote his first pieces in 1998 before forming the Chicago band Troubled Hubble, a successful touring ensemble that Otepka performed with from 1999 to 2005. Recording five albums and three EPs during their six years together, the musicians of Troubled Hubble played over 400 shows, touring Canada, criss-crossing the United States of America, and performing in every state except Alaska and Hawaii. The group played its last show in 2005 and briefly reunited in 2015 after what its Facebook page called “a brief 10-year hiatus.” But otherwise Otepka has been working as a solo act with a revolving series of backup musicians – releasing albums such as 2010's Goodness Gracious, 2013's Back to the Ache, and 2016's Back to the Lake and Seeds I & II – and earning from media outlets consistently glowing reviews.

Whatsup magazine, in praising the artist's “whimsical, heartfelt, and sometimes heartbreaking tales of honesty, triumph, and failure” stated: “Whether it is The Heligoats moniker he performs and records under, or his stream-of-consciousness lyrical style, or the whimsical song structures or even the stories he tells in between songs, [Otepka] is definitely an oddball of some sort – in the best definition of the word.” And in its take on Goodness Gracious, NPR declared, “Whichever side of the fishbowl he's facing, Otepka doles out observations and sonic adventure with tremendous generosity. He writes like someone who's always taking things apart to see how they work, who's obsessed with circuitry and ecology, so it's no surprise that his songs practically burst with intellectual curiosity.”

The Heligoats play Davenport's Triple Crown Whiskey Bar & Raccoon Motel with opening sets by Micah Schnabel and Angela Perley & the Howlin' Moons, admission is $13, and more information on the night is available by visiting MoellerNights.com.