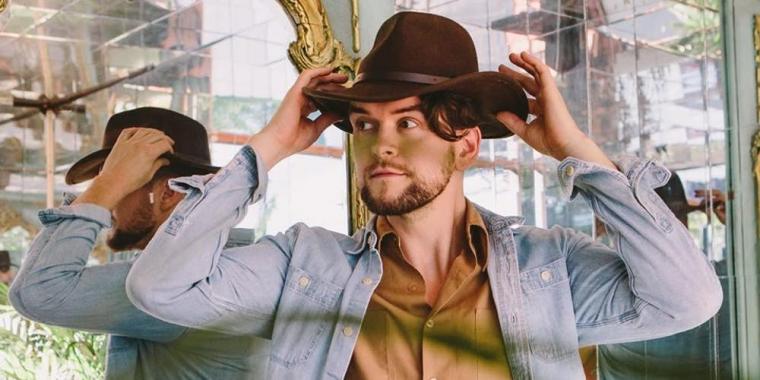 With the Minneapolis Star Tribune praising his sound as “atmospheric” and “horizon-gazing” and City Pages lauding his “kaleidoscope of emotions,” blues, country, and folk artist Luke Redfield enjoys a local Moeller Nights showcase on June 5, his homespun blend of styles also earning him raves from The A.V. Club, Elmore magazine, and American Songwriter.

Born in Duluth, Minnesota, Redfield grew up in the small towns of Cannon Falls and Kenyon. He began exploring hip hop in his teens, but after hearing a cassette of Bob Dylan's Highway 61 Revisited, Redfield had a sudden epiphany to switch genres. Teaching himself guitar, he became a folk-rock troubadour heavily influenced by Dylan's early work, as well as the albums Revival and Soul Journey by Gillian Welch, and Nebraska by Bruce Springsteen. In 2006, Redfield busked his way through Europe, sleeping in hostels and at homes of musician friends he met in London, Edinburgh, Oslo, Dublin, and Rome, and while networking through Myspace, he got his first break when he was invited to open for London-based songwriter Nick Harper. Redfield returned to the United States the following year and booked his first tour, which consisted of solo acoustic-bar gigs and street performances from Minneapolis to Austin, Texas, where Redfield ended up living. And in the summer of 2008, Redfield traveled to Homer, Alaska, where the young artist lived a Thoreau-like lifestyle without the conveniences of modernity. Living in a seven-by-seven-foot shack nicknamed “The Birdhouse,” Redfield used this meditative time for self-inquiry and wrote some his most stirring material to date, including the song “Find Me in the Light,” which attempts to explain Nondualism in layman's terms.

Redfield eventually had his career-altering break in Minneapolis, where he released his debut LP Ephemeral Eon in March of 2010. Minnesota Public Radio and Cities 97 continue to play its tracks to this day, some of which feature accompaniment by Jeremy Ylvisaker and Haley Bonar, and Ephemeral Eon went on to earn honorable mention on critic Rob Van Alstyne's list of the year's best local records. In 2012, Redfield released his sophomore LP Tusen Takk, which features members of Peter Wolf Crier, Bon Iver, and Andrew Bird's band. The A.V. Club called the recording “a zoom out from traditional folk and country music, and an infusion of a broader, sweeping style,” and the following year, Redfield released East of Santa Fe, a poignant nine-track LP that City Pages described, approvingly, as “so sparse that the listener is worried that Redfield could fall apart at any moment.” Since then, Redfield released another album in 2015's The Cartographer and an EP in that same year's Uncover the Magic, and his frequent U.S. And European tours have found the artist staring stages with the likes of Marissa Nadler, Cory Chisel, Gregory Alan Isakov, BJ Barham, and Kyle Craft.