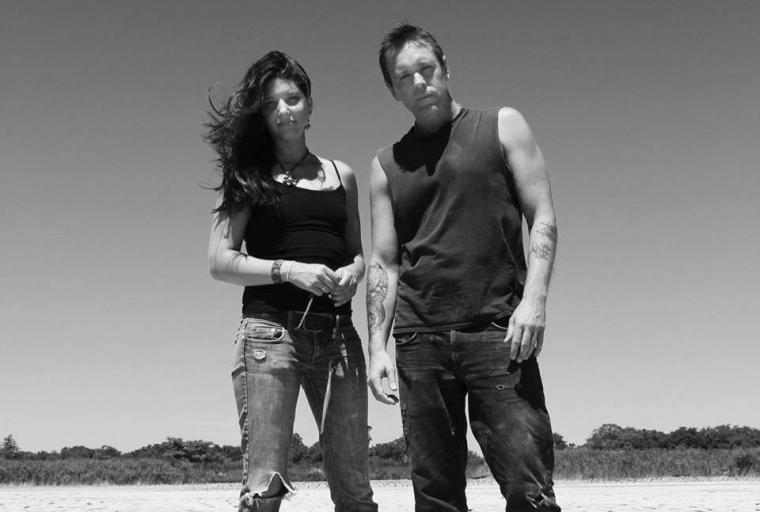 Praised by New York Music Daily for their “darkly inventive Americana” and by The Sound for their “infectious, foot-stomping Americana tunes,” the touring musicians of Muddy Ruckus – guitarist (and Rock Island native) Ryan Flaherty and “suitcase drummer” Erika Stahl – perform as Moelle Nights headliners on September 1, their 2018 album Bellows to Mend described by EvolvementRadio.com as “hands down their best work so far.”

Born and raised in Rock Island, singer/songwriter Flaherty was performing a solo concert in Portland, Maine, in 2013 when he noticed Stahl, whom he had never met before, dancing in the crowd. As with Bruce Springsteen pulling Courtney Cox on-stage in the iconic “Dancing with the Dark” video, Flaherty convinced Stahl to join him on-stage, and the pair have been together ever since. With Stahl a self-taught drummer from childhood, the musicians joined forces as Muddy Waters and released a self-titled album in 2014. Two years later, they released Pretty Bones, which led Red Line Roots to state, “The pair pull from a range of styles – roots, blues, Southern folk-rock – and use their distinctive, keening harmonies to produce a sound that is fresh and homey.” Red Line Roots also cited the released as “Album of the Year” while naming Muddy Ruckus “Rock 'n' Rollers of the Year” in 2017, the same year the duo became a NEMA nominee for “Roots Act of the Year.”

Now based in Maine, Flaherty and Stahl are current touring in support of Bellows to Mend, which has been receiving considerable support of its own from nationwide music critics. According to EvolvementRadio.com, “Bellows to Mend captures the manic passion of Muddy Ruckus’ live performances while demonstrating how much depth just two musicians can pull from the studio.” And in the music blog Vokuhila, Jesse L. Medford wrote, “The couple from Auburn, Maine, calling themselves Muddy Ruckus has put forth another album that you are absolutely going to love.”

Muddy Ruckus performs its September 6 concert at the Triple Crown Whiskey Bar & Raccoon Motel with an opening set by Kirby Brown, admission to the 7 p.m. show is $10-15, and more information is available by visiting MoellerNights.com.