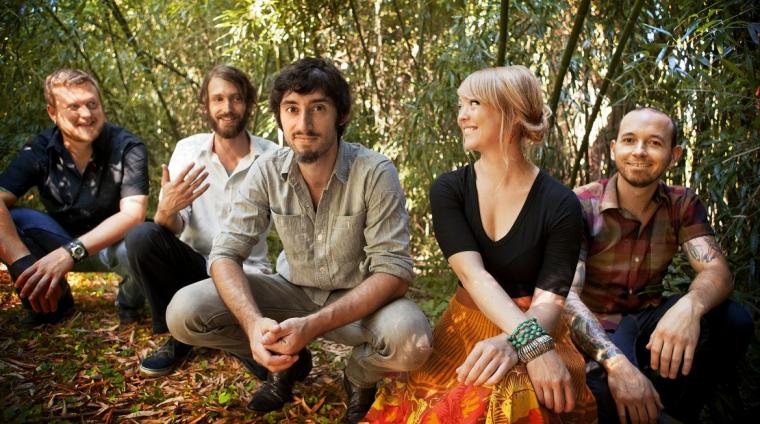 Murder by Death at the Codfish Hollow Barn -- July 26.

With New Noise magazine deeming it “a band that keeps getting better” whose members “seemingly have no problem pushing the boundaries of their unique creativeness,” the Indiana-based musicians of Murder by Death perform as Moeller Nights headliners on July 26, their concert at Maquoketa's Codfish Hollow Barn sure to prove why Americana Highways calls the group's most recent album The Other Shore “indie-rock meets Gothic-Americana at its finest.”

Its moniker taken from the Neil Simon murder-mystery spoof from 1976, Murder by Death was formed in 2000 – under the original band name Little Joe Gould – in Bloomington, Indiana, by guitarist Adam Turla and cellist Sarah Balliet (both of whom are still with the ensemble), percussionist Alexander Schrodt, keyboardist Vincent Edwards, and bassist Matt Armstrong. From its start, Murder by Death has played a range of music including instrumentals, rock, and alt-country, and has frequently employed the cello (with an electric cello for live shows) to create a Gothic sound with occasional Western references. Oftentimes, the band arranges themes such as whiskey and the devil into concept albums. The band's second album Who Will Survive, & What Will Be Left of Them?, for instance, describes a story in which the Satan wages war against a small village in Mexico. Murder by Death's fourth album Red of Tooth & Claw, meanwhile, was described by Turla as a “Homer’s Odyssey of revenge, only without the honorable character at the center.”

Since the 2002 release of the group's first studio LP Like the Exorcist, but More Breakdancing, Murder by Death has gone on to deliver seven additional studio albums, among them 2006' In Bocca al Lupo, 2010's Good Morning, Magpie, and 2012's Bitter Drink, Bitter Moom which became the highest-charting hit of the musicians' careers. For that album, Murder by Death – its lineup currently composed of Turla and Balliet, percussionists David Fountain and Dagan Thogerson, and bass player Tyler More – raised $187,048 through a Kickstarter campaign, employing the fundraising service again for 2015's Big Dark Love (raising $278,486) and 2018's The Other Shore (raising $327,407). The band is presently touring in support of its most recent release, which inspired SputnikMusic.com to save of the “superb” recording, “Not many concept albums out there achieve this level of cohesion between music and lyrics.”

Murder by Death plays the Codfish Hollow Barn on July 26 with an opening set by Christopher Gold & the New Old Things, admission to the 8 p.m. show is $25-28, and more information is available by visiting MoellerNights.com or CodfishHollowBarnstormers.com.