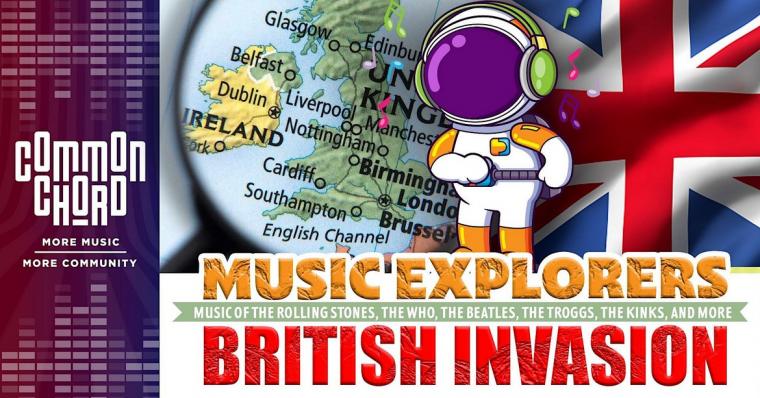 A unique and interactive concert experience that allows adult to enjoy the music they love while also providing fun and interactive activities for kids, Common Chord's new series Music Explorers will, on January 29, find its inspiration in the British Invasion, at event inviting Redstone Room patrons to cross the pond and rediscover the music of the Beatles, the Rolling Stones, the Who, and many more legendary artists.

The British Invasion was a cultural phenomenon of the mid-1960s, when rock and pop music acts from the United Kingdom and other aspects of British culture became popular in the United States and significant to the rising counterculture on both sides of the Atlantic Ocean. Pop and rock groups such as the Beatles, the Rolling Stones, the Zombies, the Kinks, Small Faces, the Dave Clark Five, Herman's Hermits, the Hollies, the Animals, Gerry & the Pacemakers, the Searchers, the Yardbirds, the Who, and Them, as well as solo singers such as Dusty Springfield, Cilla Black, Petula Clark, Tom Jones, and Donovan, were at the forefront of the invasion.

In the late-1950s, the rebellious tone and image of the United States' rock 'n' roll and blues musicians became popular among British youths. While early commercial attempts to replicate American rock mostly failed, the trad jazz–inspired skiffle craze, with its do-it-yourself attitude, produced two top-10 hits in the U.S. by Lonnie Donegan. Young British groups consequently started to combine various British and American styles in different parts of the United Kingdom, such as the movement in Liverpool known as Merseybeat, or the "beat boom."

While U.S. acts were popular in the United Kingdom, few British acts had achieved any success in the states prior to 1964; Cliff Richard, who was the best-selling British act in the United Kingdom at the time, had only one top-40 hit in the U.S. with 1959's "Living Doll." Along with Donegan, exceptions to this trend were the chart-topping hits "Auf Wiederseh'n, Sweetheart" by Vera Lynn in 1952, "He's Got the Whole World in His Hands" by Laurie London in 1958, and the instrumentals "Stranger on the Shore" by Acker Bilk and "Telstar" by the Tornados, both in 1962. One year prior, Hayley Mills' "Let's Get Together" from The Parent Trap reached the top 10, and that same year, Kenny Ball's "Midnight in Moscow" peaked at number two. Frank Ifield's "I Remember You" became the next British vocal to crack the top five, and the Springfields' version of "Silver Threads and Golden Needles" reached the top 40.

But in October of 1963, the first newspaper articles about the frenzy in England surrounding the Beatles appeared nationally in the U.S. The Beatles' November 4 Royal Variety Performance in front of the Queen Mother sparked music-industry and media interest in the group, and that November, a number of major U.S. print outlets and two network television evening programs published and broadcast stories on the phenomenon that became known as "Beatlemania." ushering in the era that would be known as the British Invasion.

Music Explorers: British Invasion will take place on January 29 from 4 to 7 p.m., admission is $10 for ages 13 and older and free for those 13 and under, and more information is available by calling (563)326-1333 and visiting CommonChordQC.org.