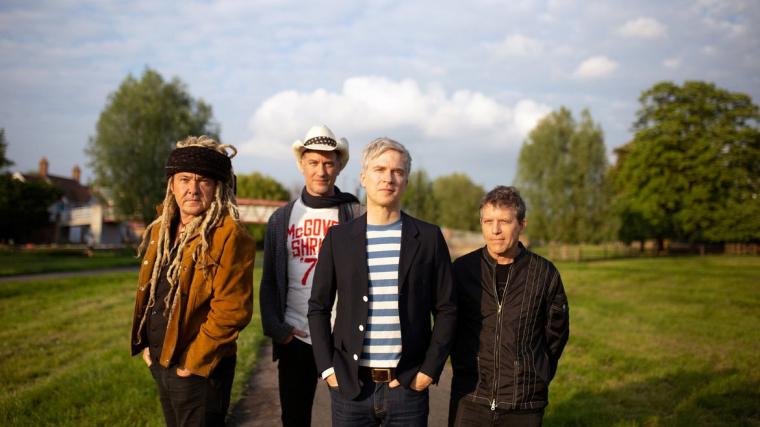 Lauded by Rolling Stone for delivering “the kind of sun-through-clouds loveliness that's been picking up indie rockers' spirits for ages,” the alternative rockers of Nada Surf headline a November 12 concert at Davenport's Raccoon Motel, with the band's most recent album Never Not Together described by Pop Matters as “the best record Nada Surf have made in quite a while, as it sees the indie-rock/power-pop group stress the need for more empathy in the world.”

Composed of Matthew Caws (lead vocals, guitar), Daniel Lorca (bass), Ira Elliot (drums), and Doug Gillard (guitar), released High/Low, their debut album, in early 1996, a work that was recorded and mastered within a 19-day period. The album's first single "Popular" presents, in spoken-word format, sarcastic advice to teenagers, and the track was a huge success for the band, reaching number 11 on the U.S. Billboard Modern Rock Tracks chart and propelling High/Low to number 63 on the Billboard 200. "Popular" was also a big hit in Iceland, topping the country's chart for two weeks, and in France, where it reached number 10 and received gold certification for sales of over 250,000. Following 1998's The Proximity Effect, Nada Surf released 2002's Let Go, a critically acclaimed album that included the successful single "Inside of Love." The group consequently went on tour for several months, including in many European festivals, and the musicians completed the decade with the release of 2005's The Weight Is a Gift, 2008's Lucky, and 2010's If I Had a Hi-Fi.

Through additional albums such as 2012's The Stars Are Indifferent to Astronomy and 2016's You Know Who You Are, critics have agreed that Nada Surf has only grown more creative and resourceful with time, each consecutive release notable for the quality of its craft as well as Caws’ ongoing growth as a songwriter. Now touring in support of their recently released EP Cycle Through, the band's most recent LP, 202's Never Not Together, was met with particular praise from all critical corners. The Associated Press deemed the recording “a delicious slice of rocking power pop” boasting “nine songs about connections, empathy, and alienation tied together by Matthew Cawsd's eternally youthful vocal and a bouquet of inviting melodies.” The Current, meanwhile, called Nada Surf's ninth full-length release "one of the best albums of their career," noting that it "shows off their prowess as experts of their craft while sharing their playful side. Never Not Together has all the hallmarks of the genre Nada Surf helped define but with a refined touch that comes from life experience and humility."

Nada Surf brings their tour to the Raccoon Motel on November 12, admission to the 7 p.m. concert is $30, and more information and tickets are available by visiting TheRaccoonMotel.com.