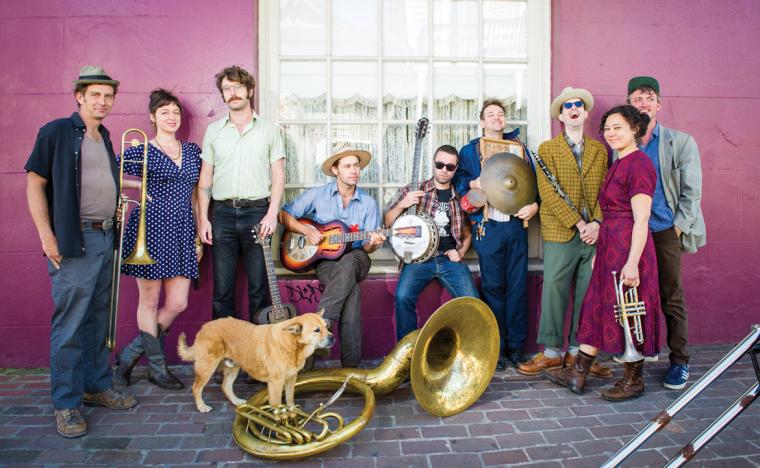 The nucleus of Tuba Skinny began coalescing in the Crescent City between 2003 and 2005, and although several of its musicians played together in a handful of other bands on the streets of New Orleans, none of them were native to the city. The ensemble's cornet player Shaye Cohn – the granddaughter of noted jazz saxophonist Al Cohn – is a Bostonian, while trombonist Barnabus Jones is a Virginian. Todd Burdick, the eponymous tuba of Tuba Skinny who also plays the banjo and guitar, is a Chicagoan, and guitarist Max Bien-Kahn is from Oregon. Vocalist and bass drummer Erika Lewis is from New York's Hudson River Valley and resides in Tennessee. And clarinetist Craig Flory and frottoirist Robin Rapuzzi are both from Seattle.

A traditional jazz street band based in New Orleans, Tuba Skinny draws its inspiration from the early jazz, ragtime, and blues movements of the 1920s and 1930s. The group began as an itinerant busking band but has gone on to perform all around the world, including at music festivals in Mexico, Sweden, Australia, Italy, France, Switzerland, and Spain. For over a decade, as stated by Offbeat magazine, Tuba Skinny "has grown steadily in popularity, releasing [10] albums, frequently touring, and attracting high-profile fans from R. Crumb to Amanda Palmer and Neil Gaiman. They've garnered fans from all over the world – young and old, neophytes and niche-enthusiasts." The group's albums have garnered multiple awards and the musicians are popular on YouTube, with more than 500, mostly fan-made videos created in variety of languages. Despite the band's global fame and frequent performances in nightclubs and at jazz festivals, however, they have continued to perform on the streets of New Orleans and other cities in order to maintain their intimate connection with audiences.

While the NOLA Block Party is free and open to all ages, donations will be accepted to raise funds for the Greater New Orleans Foundation’s Hurricane Ida Disaster Fund. The event is sponsored by Illinois Casualty Company, Holiday Inn Rock Island, Rock Island Brewing Company (RIBCO), the Daiquiri Factory, and The Arena.

“It’s rare the Quad Cities has a chance to present a jazz band of this caliber, especially outside of the summer Bix Jazz Fest," said Tyson Danner, RME’s Executive Director. "It’s even more exciting to be able to present the show for free, thanks to all the sponsors. Working with the Quad Cities Chamber through its partnership with the City of Rock Island and downtown businesses has made this possible. It’s a perfect example of the kind of great experiences we can create in the Quad Cities when we build partnerships and work together.”

“As we work to revitalize Downtown Rock Island," added the Chamber’s Downtown Rock Island Director Jack Cullen, "this is a prime opportunity to activate the Great River Plaza with world-class entertainment, draw people to hard-hit downtown businesses, and celebrate the closing days of summer in the Quad Cities. I’m grateful to RME for their partnership and support as well as our downtown businesses for teaming up to make this happen.”

The NOLA Block Party with Tuba Skinny takes place in downtown Rock Island's Great River Plaza on September 18, with gates and food vendors (Pee Wee's Restaurant and Tacos Al Vapor) opening at 6 p.m., and the outdoor concert starting at 7 p.m. Attendees are welcome to bring their own chairs, though no outside food or beverages are permitted, and more information on the event is available by calling (563)326-1333 and visiting RiverMusicExperience.org.