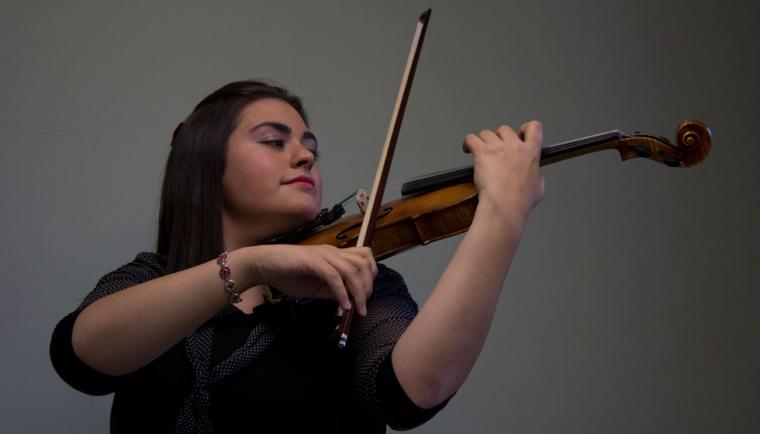 Mariela Shaker in the Nova Singers' "Home" concerts -- April 6 and 7.

For their final concerts in the group's 2018-19 season, the gifted vocalists of the professional ensemble the Nova Singers bring their talents “where the heart is” in April 6 and 7 presentations of Home – a moving and thrilling repertoire augmented by guest violinist Mariela Shaker (who will share some of her experiences as a Syrian refugee) and the world premiere of a new work by renowned composer Carol Barnett.

In discussing her ensemble's season-ender, Nova Singers director Dr. Laura Lane says, ““This is not just a concert – we have so much going on that this will be more like a concert event! First, we celebrate our ancestors with folk songs from Ireland and Mexico and a song about grandmothers. Then we visit the Middle East, singing two pieces in Arabic. Mariela Shaker and Casey Dierlam will join us on violin and piano to perform Eric Whitacre’s exquisite Five Hebrew Love Songs, and there are gorgeous American folk songs on the second half. But probably the most exciting moment will be the world premiere of 'Home Is …' by internationally known composer Carol Barnett.”

The Nova Singers held a recent poetry contest for Galesburg elementary school children, consequently commissioning internationally known composer Barnett to set their words to music, and Lane says, “I’m so proud of the students who submitted poems to our contest and thrilled with the new piece that Carol Barnett has written for us. Carol really has lifted up and brought to life the words and ideas of our local young people. They have so much wisdom to tell us about the meaning of home! Carol Barnett will be there for the premiere Saturday night, so the children and everyone in the audience will have a chance to meet her.”

Known for her audacious and engaging music, Barnett's work has been funded by national organizations and published through major publishing houses. She studied at the University of Minnesota and currently lives in Minneapolis, and believes that music is a language based on nostalgia – remembered sounds that evoke other places, times and emotions. As Barnett says, “I am most interested in communicating with my listeners by using musical language familiar to them, then adding something new.”

Guest violinist Shaker, meanwhile, graduated in 2011 from the Arabic Institute of Music in Aleppo, Syria. A survivor of the war in Syria, she received a 2013 scholarship to attend Monmouth College, and in 2015, Shaker gave her debut recital at the Kennedy Center in celebration of World Refugee Day and was named a Champion of Change for World Refugees by President Obama. Shaker is also a Service Ambassador for Points of Light and Peace Ambassador for the World Council of Arameans, and her courageous story has been profiled by the outlets including the Huffington Post, Chicago Tribune, and Washington Post. Through her music, Shaker says she is trying to build bridges, promote peace, and raise awareness for the plight of the Syrian people.

Home will be performed at Galesburg's Knox College resge Recital Hall on April 6 at 7:30 p.m. and Davenport's St. Paul Lutheran Church on April 7 at 4 p.m. Admission is $15-18 with students admitted free of charge, and more information and tickets are available by calling (309)341-7038 or visiting NovaSingers.com.