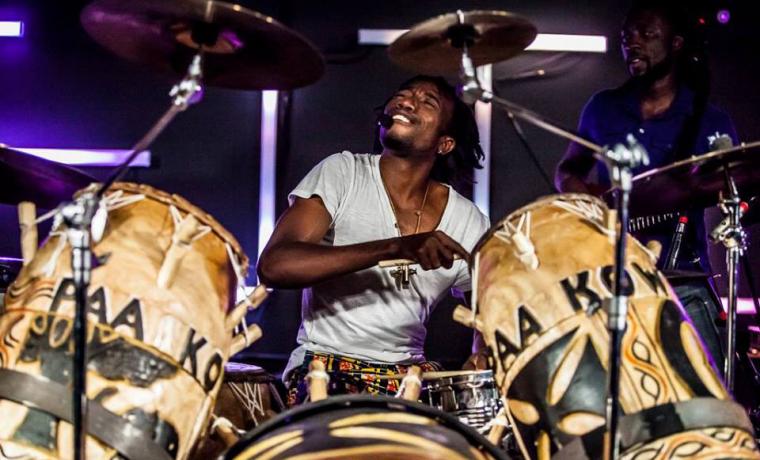 Lauded by World Music Report as an “energetic and ingenious musician and drummer” whose music “is a boiling and bubbling cauldron of African Highlife and every other kind of rhythmic style,” Afro-fusion percussionist and composer Paa Kow plays Davenport's Redstone Room in a Guest List Series co-presentation with Quad City Arts, the free October 7 event sure to prove why Modern Ghana calls the performer “Ghana's most artistic drummer.”

Growing up in a musical family in the small village of Enyan Denkyira, near Cape Coast, Ghana, Paa Kow began playing music at age five. His uncle and mother were both singers in touring concert outfit The Enidado Professional Band, and it was in this ensemble that Paa Kow began performing, first playing cowbell and congas and then eventually moving to the drum set by age seven. Due to the cost and lack of access to instruments, he would fashion his own drums out of metal cans, wire, and a fertilizer bag as a bass drum, which he used to practice for hours every day, and he also had to build his own drum pedal using an old sandal, a door hinge, and some string. While touring the country with his uncle's group, other band leaders began to take notice of the prodigious young drummer, and Paa Kow eventually caught the eye of Amakye Dede, a legend in the realm of Highlife (a music genre that started in Ghana in the 19th century). At age 14, Paa Kow was invited to Accra to join Dede's group, and after some years in Accra playing with Amakye, the nascent artist was invited to play with other major Highlife artists in the country – among them Kojo Antwi, George Darko, and Nat Brew – which led him on tours to Switzerland, Scotland, Belgium, Amsterdam, the Ivory Coast, Liberia, Togo, Egypt, and Nigeria.

In 2007, Paa Kow was invited to Boulder, Colorado, as a guest artist of the University of Colorado music school to perform with West African Highlife Ensemble directed by Dr. Kwasi Ampene. Afterward, he returned to Ghana for a short time, but then emigrated to the U.S. later that year following an invitation from musicians he had met while at the university. Paa Kow worked as a session drummer before beginning to compose his own works, and his debut album Hand Go Hand Come was released in 2012, followed by Ask in 2014 and Cookpot in 2017. Among the notable artists he has performed with in the U.S. are Victor Wooten, Michael Kang, Brad Goode, and John Gunther, and he plays a custom, traditionally inspired Ghanaian drum set that is the only one of its kind in the world, guaranteeing concert-goers an extraordinary cultural and musical experience. Paa Kow is currently touring in support of his recently released fourth album Nkwa Na Ehia, and continues to fulfill his vision of spreading the music and culture of his homeland by touring the world with his Afro-Fusion Orchestra.

Paa Kow's Redstone Room concert on October 7 starts at 7:30 p.m., admission is free, and more information is available by calling (563)326-1333 and visiting RiverMusicExperience.org.