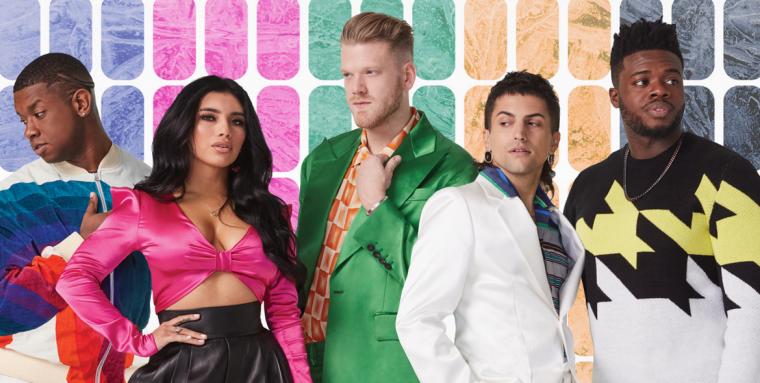 Pentatonix at the TaxSlayer Center -- June 22.

Lauded by The Sun Chronicle for their “distinct vocal harmonies, choreography, and performances [that] have helped bring a cappella into the mainstream of music,” the chart-topping pop singers of Pentatonix bring their world tour to the TaxSlayer Center on June 22, showcasing the talents that have thus far resulted in three Grammy Awards and numerous appearances on the TV smash The Sing-Off.

An a cappella group from Arlington, Texas, Pentatonix is composed of vocalists Scott Hoying, Mitch Grassi, Kristin Maldonado, Kevin Olusola, and Matt Sallee. Characterized by their pop-style arrangements with vocal harmonies, bass lines, ridding, percussion, and beatboxing, the group produces both original recordings and cover versions of modern hits and Christmas songs, sometimes sometimes in the form of medleys. Pentatonix formed in 2011 and later that year won the third season of The Spin-Off, receiving $200,000 and a recording contract with Sony Music. Afterward, the group formed its YouTube channel, distributing its music through Madison Gate Records, a label owned by Sony Pictures. Pentatonix's YouTube channel currently has over 16 million subscribers and 4 billion views, and the group's video tribute to the artists of Daft Punk has received over 300 million views.

The ensemble's debut EP PTX, Volume I was released in 2012, followed by the holiday release PTXmas the same year, with Pentatonix's third release PTX, Vol. II debuting at number one on Billboard's Independent Albums chart and number 10 on the Billboard 200 in 2013. In May of 2014, Pentatonix signed with RCA Records, a flagship label of Sony Music Entertainment, while in the same year, the group released their fourth EP PTX, Vol. III and two full-length studio albums (PTX, Vols. 1 & 2); a compilation album released in Japan, Korea and Australia; and their second holiday release That's Christmas to Me. The latter title was platinum-certified by the Recording Industry Association of America on December 24, 2014, and double platinum on February 11, 2016, becoming the highest-charting holiday album by a group since 1962 and the fourth-best-selling album in the United States in 2014. The following year, Pentatonix released its eponymous album – the ensemble's first to consist mostly of original material – and the recording debuted at the top of the Billboard 200 for the first time in the vocalists' careers. A third holiday album, A Pentatonix Christmas, debuted in 2016 along with the EP PTX, Vol. IV, and PTX, Vol. IV – Classics landed in 2017. At the Grammys, Pentatonix became the first a cappella act to win “Best Arrangement, Instrumental, or A Cappella,” doing so in 2015 and 2016, and also won a 2017 Grammy Award for “Best Country Duo/Group Performance.”

Pentatonix plays the Moline amphitheater on June 22 alongside special guest Rachel Platten, admission is $20-129.50, and tickets are available by calling (800)745-3000 or visiting TaxSlayerCenter.com.