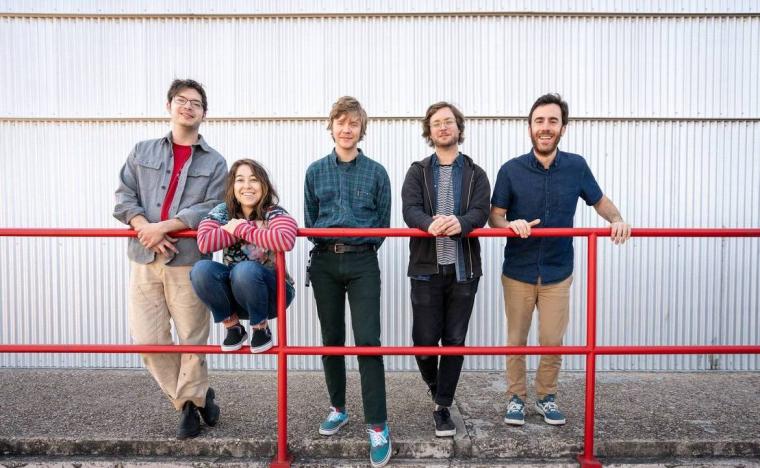 Performing in support of their latest album Marigold – a 2020 release praised by Uncut as a “vibrantly empathetic experience” of “mournful pedal steel, keening harmonies, and thumping analogue rhythms” – the indie rockers of Pinegrove play an August 31 concert at Rock Island's WAKE Brewing, an evening sure to demonstrate why Under the Radar magazine praised Marigold for boasting the band's “tightest recorded moments to date.”

Formed in Montclair, New Jersey, in 2010, Pinegrove originated with singer/songwriter Evan Stephens Hall and drummer Zack Levine, who first began playing music together at seven years old. With their fathers playing together in a local cover band, Hall and Levine debuted their own group, The Pug Fuglies, in the sixth grade, and played together in the experimental grunge band Dogwater beginning in seventh grade and continuing throughout high school. Years later, after deciding on the moniker Pinegrove, Hall posted the band's debut EP Mixtape One on Bandcamp in January of 2010. With various musicians joining Hall and Levine over the years, the band's musical style – one that employs instruments such as the banjo and pedal steel guitar – is commonly described as a mix between alt-country and emo, and Pinegrove's early years were spent self-releasing music (including their 2012 album debut Meridian) and performing DIY house shows.

After signing to independent record label Run for Cover, the group issued 2014's anthology of their early work Everything So Far, and their second studio album, 2016's Cardinal, represented a breakthrough for Pinegrove, gathering a devoted fan listenership and appearing on many music critics' top-10 year-end lists. The ensemble's album Skylight was independently released in 2018 and was followed by several sold-out tours, with the band signing to British label Rough Trade for their fourth studio album, 2020's Marigold. Pinegrove are known and admired for their literary lyricism and loyal following of fans, which refer to themselves as "Pinenuts," and the band's name comes from a prominent pine-tree row on a nature reserve at Kenyon College, where Hall attended college.

Pinegrove have also consistently aligned themselves with progressive causes throughout their career. All Bandcamp sales of the band's back catalog were donated to Planned Parenthood for a period, with profits from the live album Elsewhere devoted to the civil-rights nonprofit Southern Poverty Law Center. All profits made from Skylight were spread across three charities – the Voting Rights Project, the American Foundation for Suicide Prevention, and MusiCares – and the band has also contributed to the Trevor Project and groups protesting construction of the Dakota Access Pipeline at the Standing Rock Indian Reservation. As Hall has stated, "I do consider myself politically progressive, but I feel like our message [as a band] isn't a politicized one – it's a humanist one."

Pinegrove plays their August 31 WAKE Brewing concert with opening sets by Miloe and Grumpy, admission to the 6:30 p.m. outdoor concert is $25-30, and more information and tickets are available by visiting CodfishHollowBarnstormers.com.