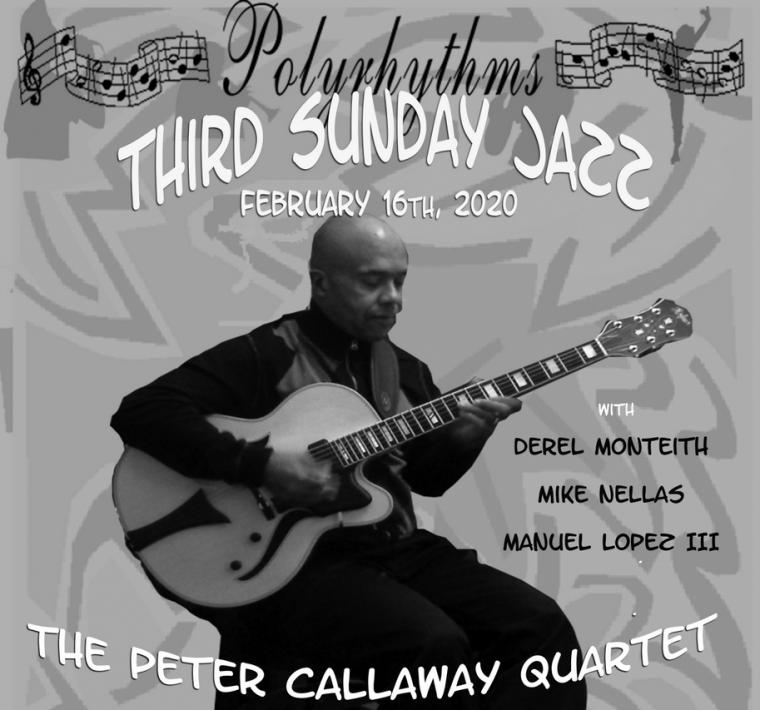 The Peter Callaway Quartet at the Redstone Room -- February 16.

A musical showcase held in support of Black History Month, the latest presentation in Polyrhythms' Third Sunday Jazz Workshop and Matinée Series finds the Midwestern greats of the Peter Callaway Quartet bringing their significant talents and deep love of jazz to Davenport's Redstone Room on February 16, offering a celebration of African-American jazz composers and musicians including Miles Davis, Herbie Hancock, George Benson, Duke Ellington, and many others.

A longtime jazz guitarist, vocalist, and composer, Callaway studied classical guitar at the Chicago Conservatory and the American Conservatory of Music in Chicago. He also studied violin with the late Otto Jelinek, conductor of the American Conservatory Symphony Orchestra and first violinist of the Chicago Symphony Orchestra, and has taught at the Old Town School of Folk Music and in Chicago public schools. With his eclectic repertoire, Callaway is a master at designing his performance and music to fit the occasion, working as a soloist or with a band, and has performed with notable musicians such as Miles Davis guitarist Pete Cosey and keyboardist Robert Irving; Earth, Wind and Fire pianist/arranger Tom-Tom Washington; and jazz trumpeter Phil Cohran, co-founder of the Association for the Advancement of Creative Musicians. Callaway was also a featured artist on Chicago's Music Alive, presented by the Mayor’s Office of Special Events, and contributed music to the Emmy Award-nominated television movie Go for Bad.

Joining its bandleader in the Peter Callaway Quartet are world-class musicians Derel Monteith on piano, Mike Nellas on bass, and Manuel Lopez III on drums. The recipient of a degree in jazz studies from the University of Miami, Monteith has performed with Nnenna Freelon, Vanessa Rubin, Frank Foster, and the Artie Shaw Orchestra, and also studied with Grammy-winning composer Maria Schneider. A well-regarded multi-instrumentalist from central Illinois, Nellas also currently plays with the Matthew Curry Band, Daniel Leahy & Pippi Ardennia, Judy Page, David Hoffman, and the Nathan Taylor Band, as well as his own jazz-organ group The Boss Trio. And beyond playing monthly sets with his ensemble at Rock Island's Circa '21 Speakeasy, Lopez has performed with such musical greats as Bill Bell, Willie Pickens, Lois DeLoach, Javon Jackson, and Nnenna Freelon, plus most of the musicians affiliated with the Louis Bellson Festival and Quad Cities jazz festivals.

The Peter Callaway Quartet plays the Redstone Room at 6 p.m. on February 16, and the concert will be preceded by a 3 p.m. workshop that will explore jazz etiquette, pedagogy, repertoire, and Callaway's own experiences in promoting the art form of jazz to aspiring musicians. Admission is $10-15 for the evening performance, with the workshop $5 for adults and free for students, and tickets and information are available by contacting Polyrhythms at (309)373-0790 and Polyrhythms.org or the Redstone Room at (563)326-1333 and RiverMusicExperience.org.