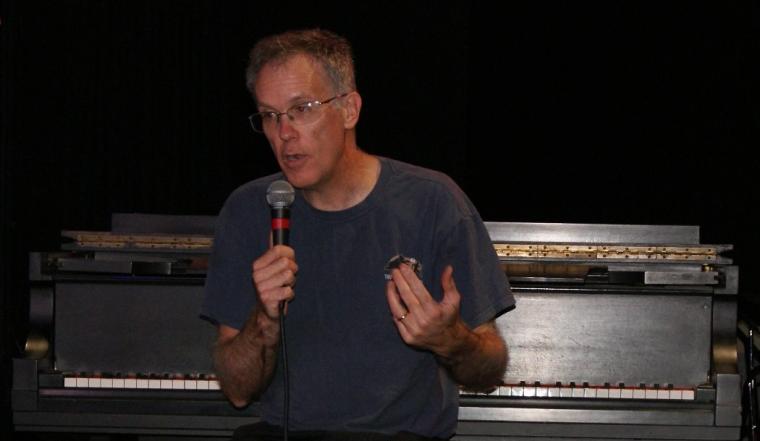 Edgar Crockett performs with Silversmith at the Redstone Room -- May 16.

Returning to Davenport's Redstone Room for the first time in more than a year, Polyrhythms' popular Third Sunday Jazz Series gets an exhilarating reboot with its May 16 concert by Silversmith, a new six-piece, hard-bop jazz band that plays originals and jazz classics by artists including Horace Silver, Jimmy Smith, Dexter Gordon, Kenny Dorham, Charles Mingus, and Lee Morgan.

Headlining the Silversmith ensemble is trumpet player Edgar Crockett, a musician, composer, and educator living in Northwestern Illinois. As a commercial artist, he has performed with Ray Charles, Roberta Flack, James Ingram, Peabo Bryson, Maureen McGovern, Shirley Jones, The Temptations, The Four Tops, and many others. Meanwhile, as a jazz trumpeter and director, Crockett has played alongside the likes of Jimmy Heath, David Sanchez, Wycliffe Gordon, Vincent Herring, and many other jazz greats. Crockett has a Ph.D. in composition from the University of Iowa and is currently a professor of music at Black Hawk College in Moline, Illinois, with his music commercially released on Summit Records and Sea Breeze Jazz.

Playing the B3 organ for Silversmith is Corey Kendrick, who received his Master's in Jazz Studies from Michigan State University in 2015 and holds a Bachelor's in Liberal Studies from Southern Illinois University Edwardsville. As an educator, he taught improvisation, jazz-piano lab, and applied-jazz piano lessons as a Graduate Assistant at Michigan State University from 2013 to 2015, and served on the faculty at the 2014 MSU Big Band Symposium and, locally, the 2013 Black Hawk College Summer Jazz Camp. Kendrick was also an adjunct instructor at Black Hawk from 2012 to 2013, where he taught Applied Jazz Piano and Jazz Combo, and coordinated the 21st Annual BHC Jazz Festival in 2013.

And with Jason Brannon as Silversmith's drummer and Kris Dinussen as the ensemble's trombone player, the jazz sextet is completed by saxophone players and spouses Peter and Lynne Hart. Peter Hart earned a BM from the University of Wisconsin - Madison and an MM from the Eastman School of Music in Rochester, New York, with both degrees in saxophone performance. Professionally, he has played with The 5th Dimension, Mary Wilson & the Supremes, Diane Carroll, Natalie Cole, and Carla Bly. Lynne Hart, meanwhile, has performed with artists including Ray Charles, Natalie Cole, Louie Bellson, Clark Terry, and Buddy De Franco, as has played alongside numerous touring Motown groups, among them The Temptations, The Supremes, and The Four Tops.

Silversmith plays Davenport's Redstone Room from 5 to 7 p.m. on May 16, admission is $15, and reservations are suggested for the socially distanced event seating. For more information and tickets, call (309)373-0790 or e-mail nate@polyrhythms.org, and visit Polyrhythms.org.