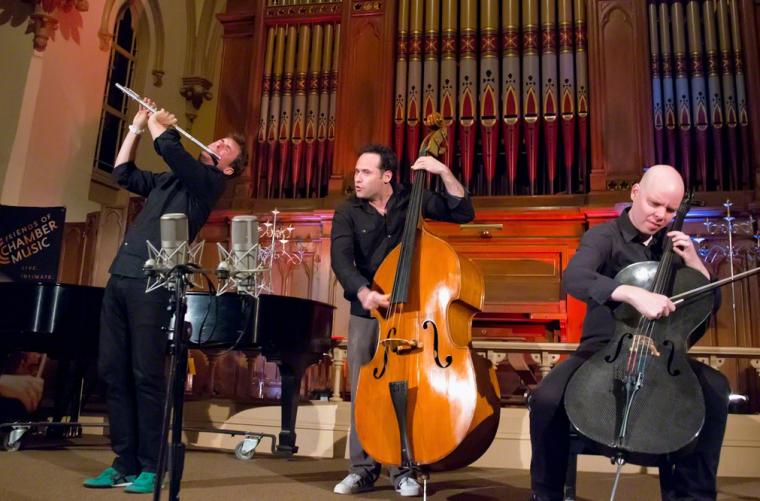 Hailed by the Wall Street Journal for their “wide appeal, subversive humor, and first-rate playing,” the genre-defying musicians of PROJECT Trio bring a uniquely 21st Century spin to chamber music as the latest guests in the Quad City Arts Visiting Artists series.

Based in Brooklyn and founded by its current lineup of Greg Pattillo (flute), Peter Seymour (double bass), and Eric Stephenson (cello), PROJECT Trio's repertoire consists of original compositions and arrangements of already-published works that highlight the musicians' versatility, bridging several styles that include classical, jazz, hip hop, rock, Americana, and bluegrass. Now performing more than 70 concerts a year, the ensemble made its Carnegie Hall debut in 2010, with recent performance highlights including appearances and collaborations with the Milwaukee, Saint Louis, and New Jersey Symphonies, the Mainly Mozart Festival, and the Chicago Sinfonietta. PROJECT Trio has also toured internationally in France, Germany, Austria, Canada, Australia, and Hong Kong, completing a tour of Russia – one sponsored by the U.S. State Department – in 2013.

With the musicians' discography including five albums and the DVD PROJECT Trio: Live in Concert, they have also amassed rave reviews for both their recordings and live performances. Downbeat magazine calls the outfit “packed with musicianship, joy, and surprise,” and Jazz Review states, “PROJECT Trio is a glorious celebration of the music of our time.”

Admission to PROJECT Trio's Bettendorf High School performance is free, although donations are encouraged, and more information on the October 20 concert is available by calling (309)793-1213 or visiting QuadCityArts.com.