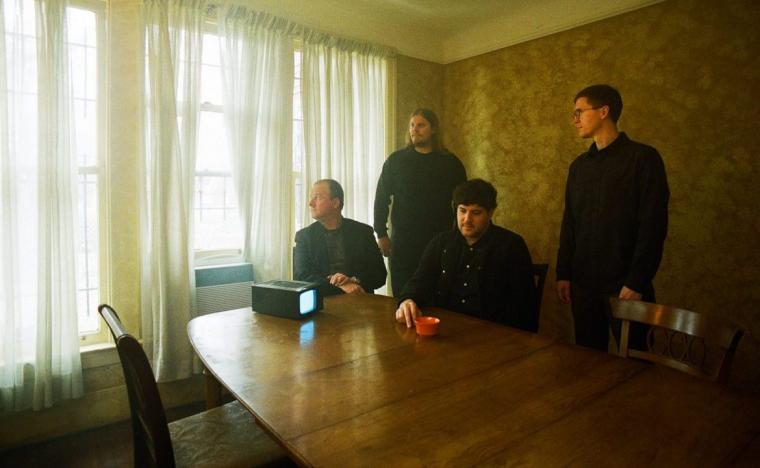 Protomartyr at the Raccoon Motel -- November 10 (photo by Trevor Naud).

With Uproxx calling their most recent album a showcase for “some of the band's most intense and driving music to date” and Pitchfork deeming it their “most expansive statement yet,” the critically lauded rockers of Protomartyr play Davenport's Raccoon Motel on November 10 in support of their 2020 release Ultimate Success Today, a recording that inspired NPR to rave of the musicians, “I don't think they needed to level up, but boy, did they.”

Composed of Joe Casey (vocals), Greg Ahee (guitar), Alex Leonard (drums), and Scott Davidson (bass), Protomartyr originated in Detroit, Michigan, in 2010, and released their debut album No Passion All Technique in 2012 via Urinal Cake Records. Although the album initially received little critical attention due to its limited circulation, Pitchfork called Protomartyr's debut "an impressive showing of sonic, lyrical, and emotional range" that "all falls under a cohesive banner,” while Crack magazine praised "the smart storytelling skills and brilliantly sardonic humor of vocalist Joe Casey." Protomartyr's second studio album, Under Color of Official Right, was released in April of 2014, while the musicians' third, The Agent Intellect, followed in October of 2015. Both recordings were likewise acclaimed, with the latter landing on "best of 2015" lists in the A.V. Club, the Chicago Tribune, Rolling Stone, Spin, and Consequence of Sound.

The band signed to Domino Records in 2017 and released their fourth studio album Relatives in Descent that September, the recording described by The Guardian as "sensational" and eventually deemed the year's very best by Loud & Quiet magazine. Meanwhile, after it was released in July of last year, Protomartyr's fifth studio album Ultimate Success Today earned the rockers some of the strongest reviews of their careers. AllMusic.com stated that the work "sounds timely in 2020, but this music would be a smart, compelling accompaniment for staring into the abyss as it begins to look back, no matter what the year." Loud & Quiet hailed it as "thought-provoking, distinctive, and testament to the boldness of post-punk in the present day." And Under the Radar praised the subtler instrumentation offered on Ultimate Success Today in comparison to past releases, finding that the songs "are allowed to breathe and build more, taking surprising twists and turns is a highly satisfying way."

Protomartyr plays their November 10 engagement at the Raccoon Motel with an opening set by Melkbelly, admission to the 8 p.m. concert is $22, and more information and tickets are available by visiting TheRaccoonMotel.com.