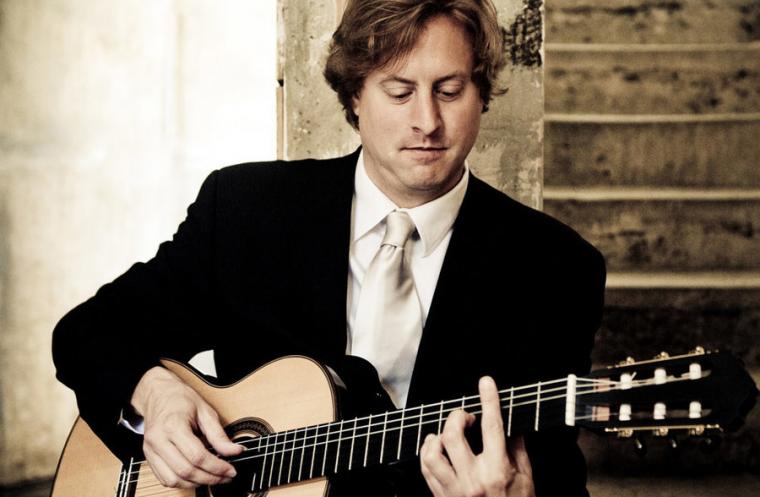 Lauded by NPR as “perhaps the most precise and soulful classical guitarist of his generation” and by Gramophone as “among the elite of today's classical guitarists,” Grammy winner Jason Vieaux serves as the latest guest in Quad City Arts Visiting Artists series, his December 8 performance at Davenport Central High School demonstrating why the Baltimore Sun called him “a substantially gifted guitarist whose playing revealed equal portions of stylistic elegance and technical polish.”

The recipient of the 2015 Grammy Award for Best Classical Instrumental Solo for his album Play, Vieaux has earned a reputation for putting his expressiveness and virtuosity at the service of a remarkably wide range of music, and his schedule of performing, teaching, and studio recording commitments is distinguished throughout the U.S. and abroad. His solo recitals have been a feature at every major guitar series in North America and at many of the important guitar festivals in Asia, Australia, Europe, and Mexico, and Vieaux's recent chamber-music collaborators have included the Escher String Quartet, Grammy-winning mezzo-soprano Sasha Cooke, acclaimed harpist Yolanda Kondonassis, and accordion/bandoneon virtuoso Julien Labro.

Vieaux has performed as a concerto soloist with over 100 orchestras, including Cleveland, Toronto, Houston, San Diego, Buffalo, Auckland Philharmonia, and Orchestra of St. Luke’s. Performance highlights include returns to the Caramoor Festival as Artist-in-Residence, Philadelphia Chamber Music Society, New York's 92Y, Ravinia Festival, Eastern Music Festival, Curtis Presents, and performances at the Phillips Collection, the National Gallery of Art, Buenos Aires’ Teatro Colon, and Shanghai Concert Hall. Meanwhile, his appearances for Chamber Music Society of Lincoln Center, Bard Music Festival, Music@Menlo, San Francisco Performances, Duke Performances, Cleveland Chamber Music Society, Strings Music Festival, Grand Teton, and many others have forged his reputation as a first-rate chamber musician, leading the Washington Post to rave, “Every note comes out fully formed, but nothing he does feels premeditated, and the music, just a little understated, speaks eloquently for itself.”

Admission to Vieaux's public concert on December 8 is $5-10, with the abbreviated performances free of charge, and more information on the artist's area residency is available by calling (309)793-1213 or visiting QuadCityArts.com.