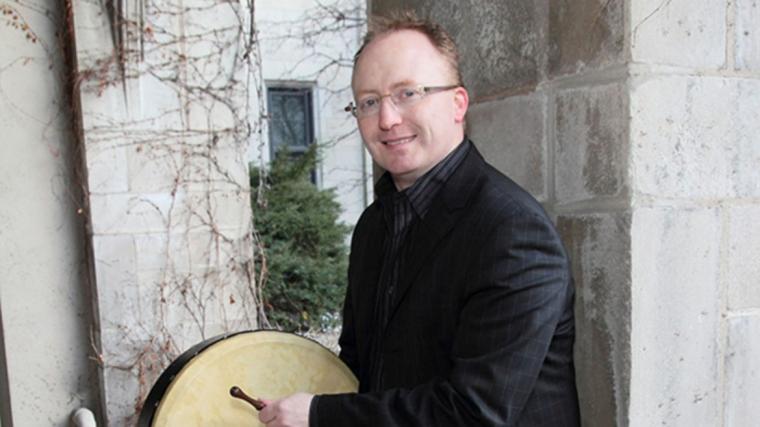 Lauded by Irish Music Magazine as an artist whose “range is stunning” and whose “interpretation is perfect,” Irish-born, Chicago-based tenor Paddy Homan will, from August 26 through 28, bring his acclaimed vocal skills to the area as one of the first guests in Quad City Arts' 2021-22 Visiting Artist Series, the popular crooner revered by Irish American News' Bill Margeson as “perhaps the best male Irish singer I've ever heard.”

Originally from Cork, Ireland, Homan is a traditional Irish Tenor and professional speaker who has brought his stunning voice and quick-witted Celtic humor to hundreds of stages and venues in the Chicago area, the Midwest, New England, California, and Hawaii, as well as in his home country. Created in 2016, Homan’s critically acclaimed one-man show I Am Ireland takes audiences on a journey through the songs, speeches, and images of the time to honor and celebrate the Irish road to freedom. Describing the work, John Devitt, chairman of the Chicago Gaelic Park Irish Fest, said, "Paddy, with his beautiful voice, wit and charm pulls together more than 200 years of Irish history that leaves the audience informed and thoroughly entertained." And the Chicago Tribune's Rick Kogan wrote, "Paddy Homan, the map of his native County Cork on his broad/happy face and his country's accent still deep in his voice, in conversation and in song, is an Irish tenor who has used his voice to great and emotional effect."

Maintaining a dual career in music and philanthropy, Homan enjoys a full music schedule on the national and international front, and also works as senior development director for Plymouth Place Retirement Community in the southwest suburbs of Chicago. He is a board member of the Chicago Council on Planned Giving , active in numerous civic and business networks, and a frequent keynote speaker in Senior Living Retirement communities where he presents on the role of music in supporting seniors at home and in their residences. Homan is engaged by many business and civic organizations as singer of Irish traditional songs, of the anthems of Ireland and America, and as a moderator in motivational programs for employees and community audiences.

Along with his extensive experience as a performer in a variety of settings, Homan brings to the stage and to workshops for learners of all ages, many years of work experience as a social worker, manager in a caretaking agency, and fundraiser to support programs for seniors. Describing his approach, Homan said: “For me, music and service to others go hand in hand. I get no greater kick out of being in someone's home, having a cuppa tea, hearing their story, and being present to them through the gift of song. It’s all about connecting with people, be it on stage in the songs I sing, or in my work. You just have to give it your all." Homan has thus far produced four CDs, with his latest, 2018's Christmas Time In Ireland, released as part of the group The Noble Call, and during the Christmas season, the artist has for several years been a featured guest performer with Chicago’s celebrated City Lights Orchestra.

Homan will deliver his full-length performance at Bettendorf's Crawford Brew Works at 4:30 p.m. on August 28, and will precede the concert with 11 a.m. outreach events at Davenport's Isabel Bloom Headquarters on August 26 and Senior Star at Elmore Place on August 27. Admission to all three events is free, and more information on the Visiting Artist Series is available by calling (309)793-1213 and visiting QuadCityArts.com.