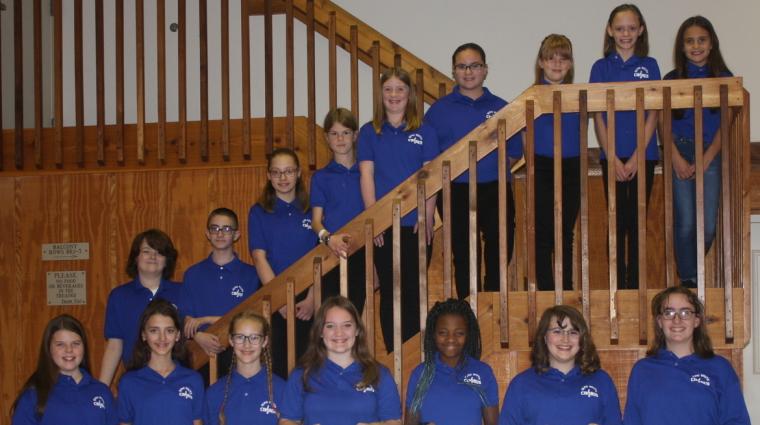 Show tunes and seasonal numbers will be in the repertoire for the Quad City Music Guild Youth Chorus' fall concert on November 17, with the performance at Moline's Prospect Park Auditorium boasting favorite holiday songs and beloved selections from such musicals as The Wizard of Oz, Willy Wonka, and Music Guild's December presentation of The Best Christmas Pageant Ever: The Musical.

Music Guild's Youth Chorus was developed with the goal of bringing young people and their families into active participation with Quad City Music Guild. With this group, the Guild is providing an opportunity for youths to become familiar with Broadway-style music, develop vocal techniques used in a choral setting, learn about the Prospect Park theatre, and enjoy opportunities to perform in front of a live audience. It is the organization’s hope many of those involved will see Music Guild as an avenue to help them continue to develop their talents, as well as a way to allow them to experience the benefits of participating as a volunteer within their community.

The Youth Chorus is under the direction of Valeree Pieper and accompanied by pianist Randin Letendre, with the ensemble composed of: Brooke Berger, Mady Beyer, Grayson Doran, Payton Doran, Ava Ethridge, Logan Heick, Olivia Heick, Isabelle Hoffman, Melodie Hoffman, Sydney James, Naomi King, Charis Moore, Shalom Moore, Sibusisiwe Moore, Talia Stevens, and Tori Vedvik. As Pieper states, “Our program features 17 hard-working, talented members of our chorus ranging in age between 3rd and 8th grade. “We have been working on musical-theatre literature, and this concert features selections from a number of older as well as newer musicals, with the second half of the program including songs with a holiday theme.”

In addition to the seasonal song “Let There Be Joy” from Music Guild's forthcoming presentation of The Best Christmas Pageant Ever, the iconic “You're a Mean One, Mr. Grinch,” and other holiday classics, the fall concert will boast a number of audience favorites from new and classic musical-theatre productions, among them: “Another Op'nin Another Show” from Kiss Me Kate; “Soon It's Gonna Rain” from The Fantasticks; “Pure Imagination” from Willy Wonka; “If I Only Had a Brain” and “Over the Rainbow” from The Wizard of Oz, “My Favorite Things” from The Sound of Music; and “Sparklejollytwinklejingley” from Elf: The Musical.

The Quad City Music Guild Youth Chorus' fall concert takes places at the Prospect Park Auditorium on November 17, admission to the 2 p.m. performance is $5-10, and more information and tickets are available by calling (309)762-6610 or visiting QCMusicGuild.com.