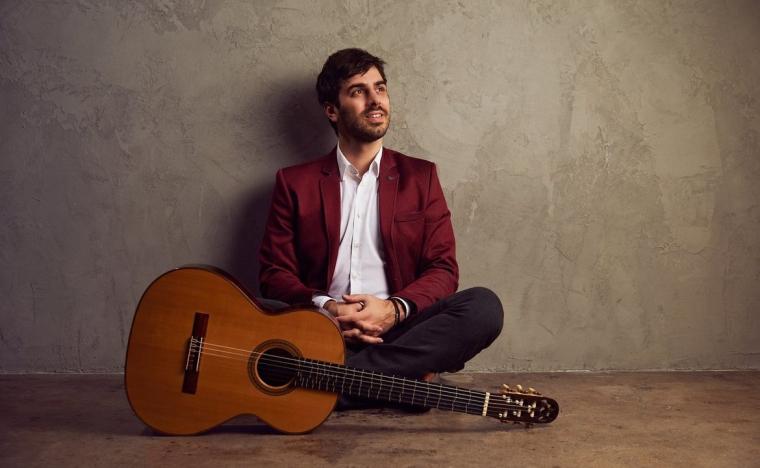 As the Quad City Symphony Orchestra reaches its halfway point in the ensemble's 2022-23 Masterworks season, the accent will be on strings in the December 3 and 4 performances of Ode to Guitar at Davenport's Adler Theatre, the repertoire boasting, among additional offerings, a beautiful Mozart piece, an exciting Michael Abels co-commission, and a special guitar solo by visiting guest artist Mak Grgić.

Grgić (pronounced GER-gich) was born in Ljubljana, Slovenia, in 1987, and before embarking on his musical studies, he showed interest in competitive mathematics – earning him number-one ranking in the country according to the competition Jurij Vega – and martial arts, winning a title of world champion at the age of 11. His first appearance on a musical stage was at age 12, and he studied with Ante Cagalj at the Elly Basic Conservatory of Music; Alvaro Pierri at the University for Music and Performing Arts in Vienna, Austria; and at USC Thornton School of Music as a student of William Kanengiser, Scott Tennant, and Brian Head, artistic director of Guitar Foundation of America. Grgić was consequently the first guitarist in the history of University of Southern California to be accepted into the Artist Diploma Program.

The DC8 ensemble was proclaimed as an “inspiring addition to the contemporary music landscape” by the Los Angeles Times, and Grgić has also collaborated with musicians such as JACK Quartet, Martin Chalifour, Clive Greensmith of the Tokyo String Quartet, and the Assad Brothers guitar duo. Additionally, Grgić began his ongoing collaboration with Billboard's charts-topping pianist Paul Cardall in 2020, exploring the meditative and mindful aspects of musical composition, and his talents netted him a nomination for a 2022 Grammy Award.

For the third Masterworks concerts of the Quad City Symphony Orhestra's 2022-23 season, Georg Philipp Telemann’s joyous and spirited Ouverture burlesque de Quichotte opens the diverse Ode to Guitar program with WHBF News 4 anchorman Jim Niedelman serving as narrator. Guitarist Grgić then joins the QCSO to premiere a thrilling, locally co-commissioned Guitar Concerto by Michael Abels. The second half of the repertoire begins with a performance of Wolfgang Amadeus Mozart’s charming and lyrical Divertimento No.1. And completing the musical presentation is Alberto Ginastera’s playful and virtuosic Variaciones concertantes, a work influenced by Argentinian folk music.

Masterworks III: Ode to Guitar performances will be held at Davenport's Adler Theatre on December 3 at 7:30 p.m. and December 4 at 2 p.m. One hour prior to each performance, concert-goers are invited to attend informational "Concert Conversations" to learn about the works on the program, and admission to the concert events is $10-65. For more information and tickets, call (563)322-0931 and visit QCSO.org.