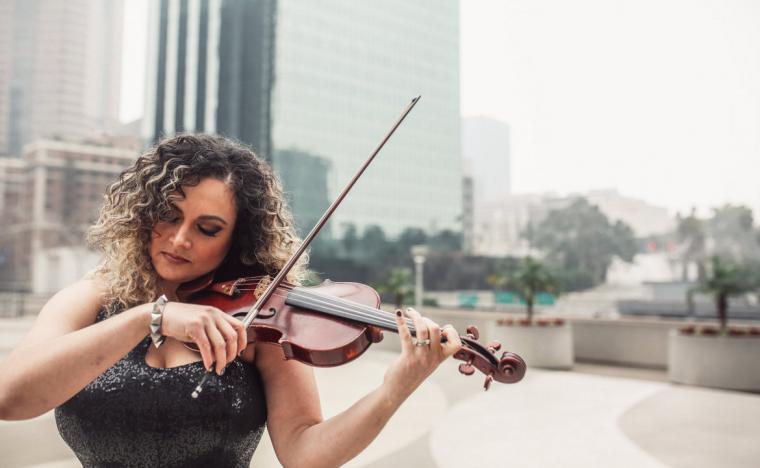 A tribute to the diversity of American music inspired by the Figge Art Museum’s current exhibition For America: 200 Years of Painting from the National Academy of Design, the Quad City Symphony Orchestra's final Masterworks concert of the 2020-21 season – For America, being performed live at the Adler Theatre on April 10 – is a symphonic tapestry weaving together many different musical traditions, and boasting the musical talents of the Sphinx Quartet: violinists Jannina Norpoth and Ruben Rengel, viola player Paul Laraia, and cellist Thomas Mesa.

Grammy Award nominee Norpoth has performed both nationally and internationally, with appearances including at the Women of the World Festival at the Apollo Theater, the Detroit Art X Festival, the Montreux Detroit Jazz Festival, the Mostly Mozart Festival, the Great Lakes Chamber Music Festival, Saturday Night Live, VH1’s Save the Music, and IFC's Dinner with the Band. As a soloist, Norpoth has performed with the Detroit Symphony Orchestra, Birmingham Bloomfield Symphony, Casalmaggiore International Chamber Ensemble, Ensemble 212, and Bachanalia Chamber Orchestra.

Praised as an “excellent soloist” of “great virtuosity” by NY Concert Review, with the Boston Globe hailing his performances as “thrilling,” Rengel was the winner of the Robert F. Smith Prize at the 2018 Sphinx Competition, the Cleveland Institute of Music Concerto Competition (2014), the Sallie Shepherd Perkins Prize (2019), the Anna Y. Tringas Award (2013), and the Juan Bautista Plaza National Violin Competition of Venezuela (2011).

As a principal member of the internationally acclaimed Sejong Soloists and as the violist of the Grammy Award winning Catalyst Quartet, Laraia has given hundreds of performances globally in venues such as Carnegie Hall’s Stern Auditorium, the Kennedy Center in Washington D.C., the Seoul Arts Center, Moscow’s Tchaikovsky Hall, and Lincoln Center’s Great Performers Series.

And Mesa has appeared as soloist with orchestras in the United States and Mexico, including the Los Angeles Philharmonic at the Hollywood Bowl, Santa Barbara Symphony, Southwest Florida Symphony Orchestra, and the Cleveland Orchestra, which received this rave review from the Cleveland Plain Dealer: “A listener with closed eyes would have been hard pressed to distinguish [Mesa’s] shapely, expressive performance from that of another gifted artist two or three times his age.”

For America's repertoire begins with Aaron Copland’s evocation of the spirit of rural Americana in Appalachian Spring. Afterward, the Sphinx Quartet joins the QCSO for Michael Abels’ energetic combination of jazz, blues, bluegrass, and Latin dance in his Delights and Dances. Those pieces will be followed by selections from two outstanding and distinctive works beginning with the Fugue from Charles Ives’ epic Symphony No. 4, a composition based on the hymn “From Greenland’s Icy Mountains.” And the program will conclude with “Chasqui” and “Coqueteos” from composer Gabriela Lena Frank’s Leyendas: An Andean Walkabout.

The Quad City Symphony Orchestra's latest Masterworks concert For America will be presented live at Davenport's Adler Theatre at 2 and 7:30 p.m. on April 10, with the program subsequently available for 30-day digital access beginning at 2 p.m. on April 11. Admission is $18-65 for the live performances and $40 per household for digital access, and more information and tickets are available by calling (563)332-7276 or visiting QCSO.org.