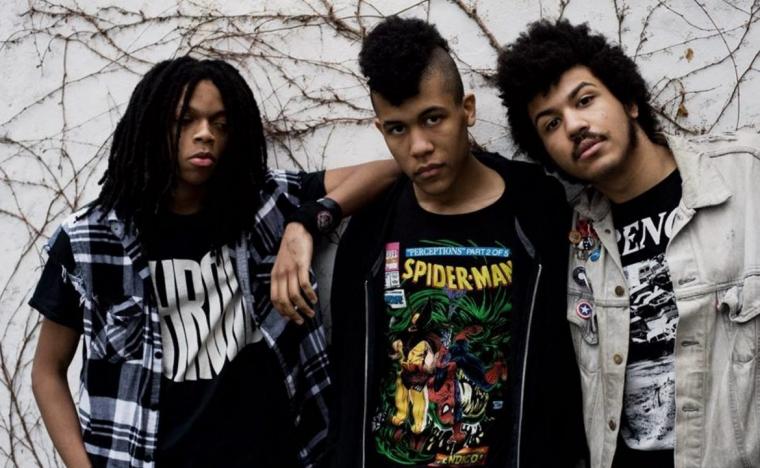 Radkay at the Raccoon Motel - November 5.

Performing locally in support of their 2020 sophomore album Green Room and its singles including “Bend,” “Ain't No Sunshine,” “Seize,” and “Underground,” the sibling punk rockers of Radkey play a November 5 concert at Davenport's Raccoon Motel, the young musicians praised by Atwood magazine for their “thick, slick rock and roll sound built on power chords and hypnotic vocal melodies.”

Radkey is composed of three home-schooled brothers from St. Joseph, Missouri: Isaiah (bass), Solomon (drums), and Dee Radke (lead vocals and guitar). The young men formed their family-titled band in 2010, and played their first show in 2011 when they opened for Fishbone. With their father Matt as their manager, the siblings have since played with the likes of Jack White, The Offspring, Descendents, Black Joe Lewis, and Titus Andronicus, and have performed at festivals including SXSW, Riot Fest, Japan's Punkspring, the United Kingdom's Download Festival, and the Coachella Valley Music & Arts Festival. In the years since Radkey's inception, the musicians have recorded three EPs in 2012’s Cat & Mouse, 2013’s Devil Fruit, and 2019's No Strange Cats, and the trio released their debut LP Dark Black Makeup in August of 2015. The music video for their song “Glore” was featured in an episode of Off the Air on Adult Swim, and when Radkey's LP debut was re-released the following year under the title Delicious Rock Noise, New Noise magazine wrote that with “pop culture lyrics and catchy melodies in the vein of Ramones coupled with driving rock and great lyrics, this album is a pure delight.”

Similar ravesd greeted the release of Green Room last year, with Atwood continuing its rave by stating that “the floppy tom-and-snare beats, the driving guitar and bass downstrokes, and Dee’s deep croon affirm that the band comes from the school of the Ramones.” Writing in the River Cities' Reader, Max Allison said of the group, “Their hooks are catchy and their melodies are distinctive – the kinds of tunes that you can actually hum along to and come to know the melodic arcs of. They know how to build up and release energy in the span of a four-minute song, and know when to pare down their arrangements to the most minimal stomp to let the vocals take center stage. It’s no surprise that this band has become popular, with videos with over 300,000 views and tens of thousands of fans on social media. They know exactly what they’re doing, and know how to get people engaged.”

Radkey plays their Davenport engagement on November 5 with opening sets by The Many Colored Death and Road Soda, admission to the 8 p.m. concert is $15, and more information and tickets are available by visiting TheRaccoonMotel.com.