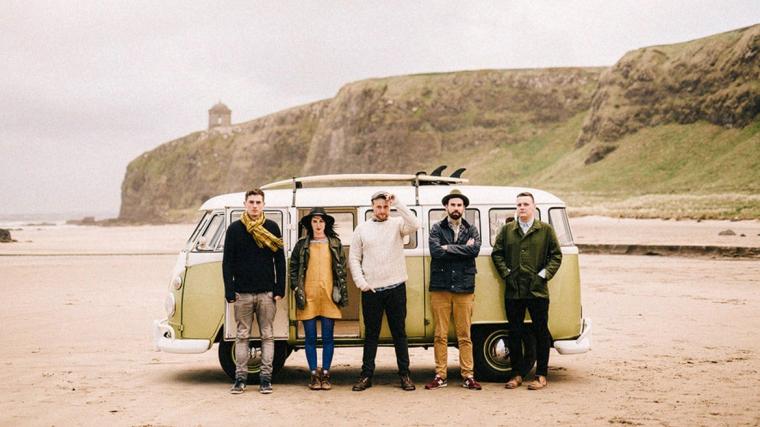 After a year spent leading virtual live-worship sets from their home base of Northern Ireland, the platinum-selling contemporary-Christian artists of Rend Collective bring their long-awaited return to touring to Davenport's Adler Theatre on September 9, the gifted Celtic musicians praised by The Christian Beat for their “shouts of energetic praise and moments of bittersweet thought,” as well as a repertoire in which “captivating sounds meet comforting lyrics.”

Its quintet composed of band leader and percussionist Gareth Gilkeson, lead vocalist and acoustic guitarist Chris Llewellyn, keyboardist Ali Gilkeson, bass guitarist Stephen Mitchell, and electric guitarist and banjo player Patrick Thompson, Rend Collective is an experimental, folk-rock, and Christian-worship ensemble that originated in Bangor, Northern Ireland. The band was established, in 2002, at Bangor Elim Church under the initial moniker Rend Collective Experiment, and started with more than 15 musicians participating. From there, the group began gathering at Northern Ireland's Rend – a ministry for spiritually hungry young adults seeking an authentic, raw, and real expression of church, and one informally pastored by bandleader and drummer Gareth Gilkeson. Designed to create a new breed of worship songs, Rend Collective released its debut album with 2010's Organic Family Hymnal, which AllMusic.com awarded four stars, stating, “With elements of indie rock and alternative, Rend seizes every opportunity to transform the experience of leading worship using a variety of sounds, voices, and instruments.”

Since the ensemble's formative years, the folk-influenced troubadours have become leading voices in the evolution of contemporary-Christian music, releasing the alt-pop project Homemade Worship by Handmade People in 2012, the live album Campfire in 2013, and 2014's The Art of Celebration, the first Rend Collective album to reach number-one on Billboard's U.S. Christian chart. The musicians' raucous, praise-filled live shows have consequently sold out tours on both sides of the Atlantic, and over the years, Rend Collective has shared stages with some of the biggest names in Christian music, among them Chris Tomlin, Matt Redman, and Tenth Avenue North. The band's revival hymn “Build Your Kingdom Here,” meanwhile, earned the group a Dove Award nomination, 2018's Good News provided the ensemble with another chart-topping album, and all three of the group's most recent releases – 2019's Sparkle. Pop, Rampage and 2020's Choose to Worship and A Jolly Irish Christmas (Vol. 2) – landed among the Billboard chart's top three.

Rend Collective performs its Davenport engagement at 7 p.m. on September 9, admission is $18-65, and tickets are available by calling (800)745-3000 and visiting AdlerTheatre.com.