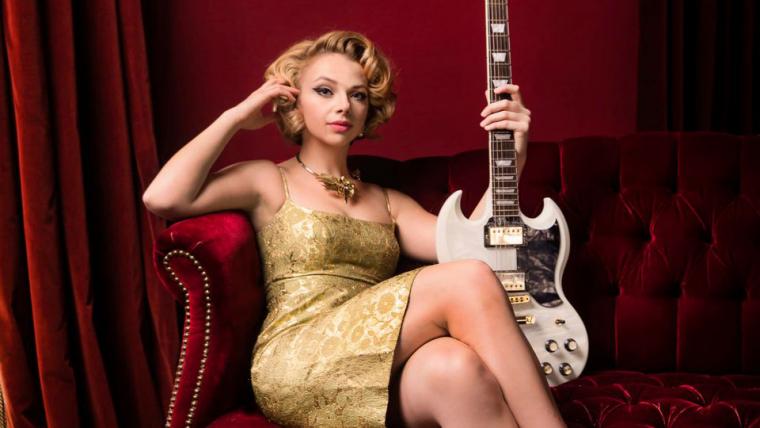 Called “an impressive blues guitarist who sings with sweet power” by the New York Times and praised by Bluest Blast for “her intense, pyrotechnic take on blues rock,” recording sensation Samantha Fish returns to Davenport's Redstone Room on December 14, the artist's most recent albums – 2017's Chills & Fever and Belle of the West – leading American Songwriter to state, “It's unlikely Fish, or many other acts, will deliver two terrific yet very different-sounding albums in a single year again.”

A native of Kansas City, Missouri, the 29-year-old Fish recorded and produced her album debut Live Bait in 2009, which led to Ruf Records hiring the singer/guitarist and two other female blues artists – Cassie Taylor and Dani Wilde – for an album titled Girls with Guitars. The three performers consequently toured on the Ruf Records 2011 Blues Caravan in the U.S. and Europe, with Fish herself also touring with her Samantha Fish Band, an ensemble featuring "Go-Go Ray" Pollard on drums and Chris Alexander on bass. Also in 2011, Fish recorded Runaway with the help of guitarist and mentor Mike Zito, and went on to win the 2012 Blues Music Award for Best New Artist, the first of more than a dozen professional accoldaes that Fish has amassed to date.

Since that early triumph, Fish has released a quartet of solo albums in 2013's Black Wind Howlin', 2015's Wild Heart, and the rare 2017 two-fer of Chills & Fever and Belle of the West, leading her hometown paper The Kansas City Star to rave, “Samantha Fish has kicked down the door of the patriarchal blues club,” and to add that the young artist “displays more imagination and creativity than some blues veterans exhibit over the course of their careers.” With Wild Heart and Belle of the West both topping the Billboard Blues Albums charts, Fish has also been a recent music-awards magnet, earning no less than 16 major citations in the last three years alone. In addition to her 2012 acknowledgment as Best New Artist, the Blues Music Awards named Fish 2018's Contemporary Blues Female Artist of the Year, with the performer also winning a dozen Independent Blues Awards, a 2017 Blues Blast Music Awards for Chills & Fever, and this year's Annual Living Blues Award for Female Blues Artist of the Year.

Samantha Fish's December 14 engagement opens with a set by Jonathon Long, admission to the 8 p.m. concert is $18-20, and more information and tickets are available by calling (563)326-1333 or visiting RiverMusicExperience.org.